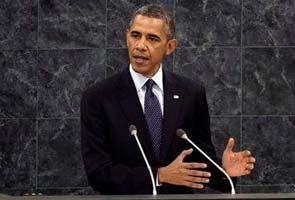 United Nations: President Barack Obama said today the United States was ready to engage diplomatically with longtime foe Iran but put the onus on the new Iranian president to prove he is serious about pursuing a nuclear deal.

Striking a cautiously optimistic tone in a speech to the United Nations General Assembly, Obama said he was determined to test President Hassan Rouhani's recent overtures and challenged him to take concrete steps toward resolving Iran's long-running nuclear dispute with the West.

"Conciliatory words will have to be matched by actions that are transparent and verifiable," Obama told the annual gathering of world leaders in New York.

Rouhani's recent gestures, including agreement to renew long-stalled talks with world powers on its nuclear program, have raised hopes for a historic opening in relations between Washington and Tehran after more than three decades of estrangement.

The White House has left open the possibility that Obama and Rouhani could meet - at least for a handshake on the UN sidelines - later on Tuesday. Even a fleeting encounter would be important given that it would be the first face-to-face contact between US and Iranian heads of government since before the 1979 Islamic revolution that ousted the US-backed shah.

But differences over Iran's nuclear program and skepticism about Rouhani's intentions, especially from US lawmakers and close US ally Israel, have cast doubt on the prospect for any immediate breakthrough between Washington and Tehran.

Seeking to keep expectations under control, Obama said suspicions between the two countries were too entrenched to believe their troubled history can be overcome overnight.

"The roadblocks may prove to be too great but I firmly believe the diplomatic path must be tested," Obama said.

Obama suggested that Rouhani's recent overtures could provide the basis for an elusive deal to curb Iran's nuclear ambitions and said he had instructed Secretary of State John Kerry to mount a diplomatic effort along with other world powers.

But Obama stopped short of offering any concessions such as a softening of sanctions that have crippled Iran's economy.

He reaffirmed his pledge that his administration would not tolerate Iran's development of nuclear weapons but avoided repeating his previous assertion that all options are on the table - code for possible military action - in dealing with the Iranian nuclear issue.

French President Francois Hollande said he expects "concrete gestures" by Iran to show it will give up its military nuclear program and that while he will meet with the Iranian president on the U.N. sidelines, he is still firm on nuclear non-proliferation.

Rouhani to have chance to answer Obama

Obama cited resolving the Iranian nuclear standoff and reaching an Israeli-Palestinian peace deal as his two main policy priorities in the Middle East, efforts that he said he believes can help bring stability to the volatile region.

He also urged the UN Security Council to approve a strong resolution aimed at ensuring Syria keeps its commitments to give up its chemical weapons, and said the United States will provide an additional $340 million in humanitarian aid.

Iran is a key ally of Syrian President Bashar al-Assad, a US foe whose country has been torn by civil war since 2011.

Rouhani, a moderate cleric elected in June by Iranian voters desperate for relief from economically crushing international sanctions, will have a chance to respond when he makes his UN debut later on Tuesday. He and Obama recently exchanged courteous letters.

Rouhani is expected to keep up his charm offensive in front of the world body, further distancing himself from his hard-line predecessor, Mahmoud Ahmadinejad, who was widely vilified in the West for doubting the Holocaust and questioning Israel's right to exist. But it was unclear whether Rouhani would offer anything specific.

The crux of Iran's long-running dispute with the West is its nuclear drive. The United States and its allies suspect that Iran seeks to develop nuclear weapons, but Tehran insists its nuclear program is for peaceful civilian energy purposes only.

The Israeli government voiced concern on Tuesday over a potential meeting of the two presidents, saying Tehran's conciliatory overtures masked an acceleration of its disputed nuclear program and that sanctions should not be relaxed.

The Jewish state, believed to be the Middle East's only nuclear-armed power, has long threatened military strikes on Iran's nuclear sites if diplomacy fails.

Asked if there would be an Obama-Rouhani handshake, Yuval Steinitz, the cabinet minister representing Israel at the UN forum in New York, said: "I hope not. I don't know."

There was no immediate Israeli reaction to Obama's speech. But the Israeli delegation planned to be absent from the hall for Rouhani's address, sticking to a tradition of boycotting Iranian presidents' appearances.

"Despite the new Iranian president's 'smiles offensive' the regime's policy has not changed at all," Israeli Prime Minister Benjamin Netanyahu's office said in a statement.

The White House has ruled out formal talks between Obama and Rouhani in New York.

Iran has usually seated low-level officials at its General Assembly table for Obama's speeches, but this time Iranian Foreign Minister Javad Zarif was present in the hall.

Obama appears determined not to miss an opportunity for a major foreign policy achievement while at the same time protecting himself from U.S. conservatives who regard the outreach to Iran as weakness.

The White House hopes to counter critics who say Obama's recent decision not to bomb Syria would embolden Tehran in its nuclear defiance.

Promoted
Listen to the latest songs, only on JioSaavn.com
A US-Russian agreement this month aimed at getting control of Syrian chemical weapons after an August 21 poison gas attack in Syria has added momentum to efforts to engage Iran.