Barack Obama pledges diplomacy with Iran, but he and Hassan Rouhani don't meet 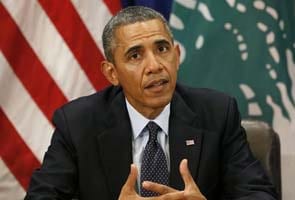 Barack Obama speaks during his meeting with Lebanon's President Michel Sleiman (not pictured) at the United Nations General Assembly in New York.

United Nations: U.S. President Barack Obama on Tuesday cautiously embraced overtures from Iran's new president as the basis for a possible nuclear deal, but a failed effort to arrange a simple handshake between the two leaders underscored entrenched distrust that will be hard to overcome.

In a speech to the United Nations, Obama said he was determined to test President Hassan Rouhani's recent diplomatic gestures and challenged him to take concrete steps toward resolving Iran's long-running nuclear dispute with the West.

Hours later, Rouhani used his debut at the world body to pledge Iran's willingness to engage immediately in "time-bound" talks on the nuclear issue but he offered no new concessions and repeated many of Iran's grievances against the United States, and Washington's key Middle East ally, Israel.

He steered clear, however, of the Holocaust-denial rhetoric that was characteristic of his hard-line predecessor, Mahmoud Ahmadinejad, and later told CNN that the Holocaust had been a "reprehensible crime" against Jews, although the scale of it was a matter for historians.

Rouhani told CNN he did not meet Obama at the U.N. General Assembly because the two sides "didn't have sufficient time to really coordinate the meeting."

But he said the environment was changing because Iranians wanted "a new era of relations" with the people of the rest of the world. He then switched to English and said with a smile: "I would like to say to American people, I bring peace and friendship from Iranians to Americans."

A senior U.S. official said the difficulty in arranging the handshake had been on the Iranian side.

"We indicated that the two leaders could have had a discussion on the margins if the opportunity presented itself," the official said. "The Iranians got back to us. It was clear that it was too complicated for them to do that at this time given their own dynamic back home."

The failed handshake was a sign of the difficulties the United States and Iran countries face in trying to seize a historic opening after decades of hostility.

Even a brief meeting would have been symbolically important given that it would have been the first face-to-face contact between U.S. and Iranian heads of government since before the 1979 Islamic revolution that ousted the U.S.-backed shah.

Rouhani's gestures since taking office last month, including agreeing to renew long-stalled talks with world powers on Iran's nuclear program, have raised hopes for a thaw in relations between Washington and Tehran after years of estrangement.

But even as Obama welcomed signs of a "more moderate course" by Iran, Israeli Prime Minister Benjamin Netanyahu said the world should not be fooled by Rouhani's "soothing words." The Israeli leader said Iran was trying to mask its continued quest for a nuclear bomb, something Tehran denies it is seeking.

After Rouhani's speech, the Israeli leader described the address as a "cynical" attempt to buy time to develop a nuclear- weapons capability.

Obama stressed that "conciliatory words" from Iran "will have to be matched by actions that are transparent and verifiable.

Skepticism about Rouhani's intentions have cast doubt on the prospect for any immediate breakthrough between Washington and Tehran.

The Jewish state, believed to be the Middle East's only nuclear-armed power, has long threatened military strikes on Iran's nuclear sites if diplomacy fails.

Seeking to keep expectations under control, Obama said suspicions between Iran and the United States were too great to believe their troubled history can be overcome overnight.

"The roadblocks may prove to be too great but I firmly believe the diplomatic path must be tested," Obama said.

Obama suggested though that Rouhani's overtures could "offer the basis for a meaningful agreement" to curb Iran's nuclear ambitions and said he had instructed Secretary of State John Kerry to press a diplomatic effort along with other world powers. He cited resolving the Iranian nuclear standoff and reaching an Israeli-Palestinian peace deal as the key U.S. objectives in the Middle East.

Kerry and his counterparts from the five permanent members of the U.N. Security Council and Germany are due to meet Iran's foreign minister on Thursday to discuss the nuclear issue. It will be the most high-level diplomatic meeting between the countries since Obama took office in 2008.

In his speech, Obama stopped short of offering concessions such as a softening of sanctions crippling Iran's economy.

For his part, Rouhani said in his speech that Iran was prepared to work on a framework for managing differences with the United States and that he hoped Obama would show the political will to resist "warmongering pressure groups" on the nuclear issue.

At the same time, he denounced sanctions imposed by the United Nations and the West as a violation of human rights.

"These sanctions are violent, pure and simple," he said. "Sanctions beyond any and all rhetoric, cause belligerence, warmongering and human suffering."

In spite of his Holocaust comments, Rouhani leveled a barrage of criticism clearly directed against Israel - without mentioning it by name - denouncing the "brutal repression of the Palestinian people."

A senior Obama administration official said in reaction to Rouhani's speech that he had not been as strident as Ahmadinejad but the message was not a surprise.

"It's not surprising the Iranian leader would criticize sanctions," he said.

While Obama and Rouhani had exchanged courteous letters ahead of the U.N. meeting, all signs point to a tough road ahead as their two countries seek to engage diplomatically. Both men face the risk of domestic criticism if they are perceived to have given too much ground to the other side.

Obama had been open to a meeting with Rouhani at the United Nations, but after discussions between aides at a "working level," the Iranians were not ready to have an encounter at the presidential level, U.S. officials said.

There had been feverish speculation that Obama and Rouhani might greet each other in passing at a U.N.-hosted luncheon but the Iranian president skipped it. The official reason was because alcohol was served with the meal, according to Press TV, Iran's English-language broadcaster.

Rouhani has said his election was a mandate from Iranians for more moderate policies but hard-line conservatives skeptical of any d&#233;tente with the United States are still dominant in Iran's parliament and military institutions, and the newly elected president might have feared a backlash.

Obama appears keen to pursue an opportunity for a major foreign policy achievement, but at the same time needs to protect himself from U.S. conservatives who see outreach to Iran as weakness.

A face-to-face meeting would have posed political risks for Obama, just as for Rouhani, as it could have increased expectations for swift progress and fuelled criticism that he is rewarding the new Iranian president prematurely.

A group of 11 Republican U.S. senators, led by Florida's Marco Rubio, wrote to Obama on Tuesday expressing concern that he might be considering offering a concession that would allow Iran to preserve part of a nuclear-weapons program.

In his speech, Obama reaffirmed his pledge that his administration would not tolerate Iran's development of nuclear weapons but avoided repeating his previous assertion that all options are on the table - code for possible military action - in dealing with the Iranian nuclear issue.

French President Francois Hollande became the first Western leader to meet Rouhani on Tuesday after warning that Paris expects "concrete gestures" by Iran to show it will give up a military nuclear program.

A French presidential source said the 40-minute meeting had been polite and courteous and centered on Iran's nuclear program, the crisis in Syria and neighboring Lebanon, where Tehran has considerable influence over the Hezbollah militia.

Promoted
Listen to the latest songs, only on JioSaavn.com
"Compared to the previous administration, there are signs, but the reality is that there are still hurdles to jump and progress to be made," the source said.