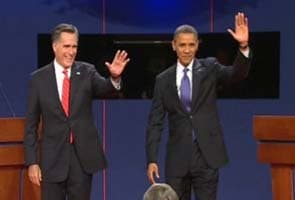 London: U.S. President Barack Obama will win the popular vote by two per cent in Tuesday's election while beating Republican opponent Mitt Romney in most of the battleground states, a British YouGov survey of 36,000 American voters forecast.

The election is widely viewed as a very close contest, but President Obama is projected in the poll to take almost two-thirds of the electoral college votes in the nine states seen as likely to decide the result.

"We are predicting that Obama is going to hang on to the presidency, but by a smaller margin than in 2008," YouGov President Peter Kellner said in a statement.

YouGov carried out the poll in 27 U.S. states.

Obama holds a clear advantage in the last day of campaigning - 237 guaranteed electoral college votes to Romney's 191, and YouGov insisted that they and most other pollsters would have to be "systematically wrong" to allow for a Romney victory.

A minimum 270 electoral college votes is needed for victory.

YouGov noted the potential, though, for Obama's situation to echo that of President George W. Bush in 2000, when he lost the popular vote to Al Gore but still came out on top.

"In such a tight race, no doubt the Democrats are not only concerned about losing the White House, but are also worried about the cloud that could hang over Obama's second term if he does not win the popular vote," Kellner said.

Obama is said to have struggled to live up to the expectations he stirred in 2008. He is certainly on course for a less convincing victory than he won four years ago - 303 electoral college votes now to 365 then, the poll indicated.

But Romney too has had a difficult time in winning over independents and had to come through a long and bruising Republican primary process.

"Whatever happens tomorrow, this will undeniably be an historic election," Kellner said.