The ceremony had been due to continue with an open-top car parade before the public, with the royal couple donning formal Western clothes, including a gown and tiara for the empress. 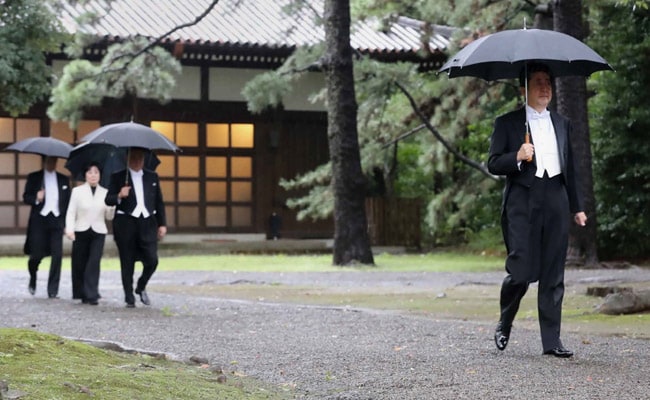 The ceremony proclaiming the enthronement of Japan's Emperor Naruhito on Tuesday will be a tightly choreographed and solemn affair, steeped in ritual, that cements his ascension to the Chrysanthemum Throne.

Here are some details of the ceremony's main elements:

After a private morning ceremony to "report" the day's proceedings to his ancestors, Emperor Naruhito will prepare for the main event of the ceremony, in the Imperial Palace's Pine Room.

The palace courtyard will be adorned with two rows of colourful banners under which will be lined up imperial guards, bearers of ceremonial objects, and gong and drum players.

Around two thousand guests will be present, most in seating around the courtyard that looks onto "Matsu-no-Ma" Pine Room, considered the palace's most elegant hall.

Only a handful of people, including royalty and senior government officials, will be in the room itself.

The guests will have received strict guidelines on appropriate clothing for the event, including morning suit or formal kimono for men and dresses or kimonos for women.

The ceremony will start at 1:00 pm (0400 GMT) precisely, with the emperor entering the room from an adjacent hall, dressed in a brown-gold robe, along with attendants carrying the imperial regalia.
He will then literally ascend his throne, a tall black-and-gold octagonal structure with long purple curtains housing a simple chair, called the Takamikura.

Empress Masako will follow in a multi-layered robe that is so heavy it can be difficult to move, ascending her similarly elaborate throne, called the Michodai.

Once they are in place, the curtains will be ceremonially opened, revealing the royals inside.

No verbal instructions will be heard during the tightly choreographed ceremony, with only the sounds of drums and gongs signaling when movement will occur.

With the royals installed in their thrones, a drumbeat will give the signal for attendees, including envoys from around 180 countries and institutions, to rise.

The emperor, also standing, will then make the official proclamation, likely to be along the lines of the declaration his father decades earlier: "I proclaim my enthronement to those at home and abroad."
Prime Minister Shinzo Abe will then shout "banzai" ("long live the Emperor") three times, raising his hands in salute with each exclamation.

Guests are expected to join the cheers but foreign invitees are not obliged, according to a government official.

The former emperor and empress will not be in the crowd, and nor will Naruhito and Masako's only child 17-year-old Princess Aiko, because she is a minor.

The ceremony had been due to continue with an open-top car parade before the public, with the royal couple donning formal Western clothes, including a gown and tiara for the empress.
But in light of the devastation caused by Typhoon Hagibis, which killed more than 80 people, the Japanese government has postponed the parade until November 10.

A series of banquets, starting from the evening of the proclamation, will still go ahead at the palace.

The final part of the imperial rites will come in November, when the emperor participates in the Daijosai thanksgiving ceremony.
Again dressed in traditional robes, he will offer newly harvested rice to the imperial ancestors "and the deities of heaven and earth", thanking them for a bountiful harvest and for peace.

The rice was planted earlier in the year after palace courtiers selected sites using an ancient ritual involving the shells of rare green sea turtles.

Two thin plates made from turtle shells were heated over a flame to produce cracks, which "told" officials to grow the rice in the ancient capital of Kyoto and north of Tokyo in Tochigi prefecture.

The thanksgiving ritual will be performed on November 14-15, with the main portion taking place overnight in a specially built hall where the emperor will eat the royal rice.

(Except for the headline, this story has not been edited by NDTV staff and is published from a syndicated feed.)
Comments
BanzaiJapan crowing ceremonyEmperor Naruhito