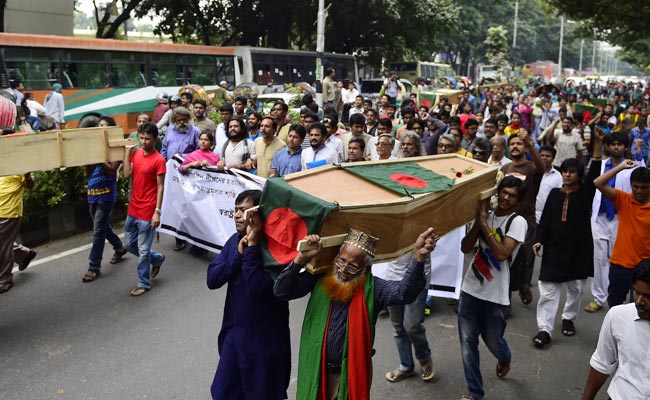 Secular activists marched with mock coffins to protest the recent murder of a publisher and attempted murder of writers and bloggers that have been claimed by Islamic extremists. (AFP)

Dhaka, Bangladesh: Bangladesh has ordered policemen to shoot in self-defence if fired upon, the home minister said today, after a policeman was killed in an attack claimed by Islamic State terrorists.

Usually, policemen at checkpoints and guarding government installations have to get take permission from their superiors or a magistrate before they can open fire.

But a wave of attacks on bloggers and publishers for publishing articles critical of religious extremism as well as the killing of two foreigners have raised fears that terrorrists are targeting its secular democracy.

"We have asked the police to counter any attacks on them. They can open fire immediately for their safety," Home Minister Asaduzzaman Khan told Reuters.

On Wednesday, two men on a motorcycle stabbed a policeman at a checkpoint in Ashulia, about 20 km (13 miles) north of the capital, Dhaka, in an attack that was later claimed by the Islamic State. The men fled without the police firing a shot.

The US-based SITE Intelligence Group said the Islamic State had claimed responsibility for that killing.

Khan however rejected that claim pointing the finger instead at domestic political rivals linked to Islamist parties.

"This is nothing but a plan to destabilize the country and create panic among the police," he said.

Bangladesh's government has put several leaders of the opposition Jamaat-e-Islami on trial for war crimes committed during the 1971 war of independence and believes some of its members are instigating terrorist groups to carry out attacks.

Police said this week that a home-grown group called Ansarullah Bangla Team was suspected of being behind attacks on publishers and writers in Dhaka last weekend.
© Thomson Reuters 2015