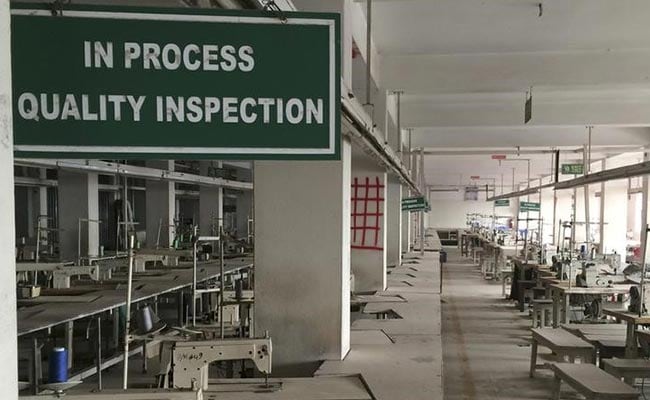 A sign is seen as a building safety assessment is being conducted at an Adorn Knitwear garments factory in Dhaka. (Reuters photo)

DHAKA: More than 80 percent of Bangladesh's garment factories supplying global retailers have been found to be safe, the government said today, citing improvements made after a deadly 2013 accident.

Syed Ahmed, the inspector general of factories, said 1,475 garment factories had been assessed as part of a government initiative supported by the International Labour Organization, Canada, the Netherlands and United Kingdom.

Some 81 per cent were found to adhere to building codes, as well as fire and electrical safety standards, he said.

Among the other factories, the government has ordered 37 to be closed for failing to address safety issues on their premises and another 209 have been warned they would be closed if they didn't take remedial measures immediately.

Bangladesh's garment export industry, the world's second biggest, has been in the spotlight since the collapse of Rana Plaza in a Dhaka suburb in 2013 in which more than 1,100 people were killed, most of them poor seamstresses.

That accident prompted a review of safety standards in the factories, with many handed lists of structural, electrical and fire safety fixes and upgrades costing hundreds of millions of dollars.

Sirajul Islam Roni, president of the Bangladesh National Garment Workers Employees League, welcomed the findings of the government investigation and urged the government to find jobs for the workers of firms that had been shut down.

The garment industry is the lifeline of Bangladesh's economy, earning $25 billion in exports each year and employing 4 million workers, mainly women.
© Thomson Reuters 2015