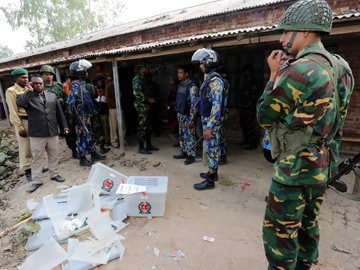 Bangladeshi police and soldiers stand next to damaged ballot boxes in front of a polling station after it was attacked by protestors in the northern town of Bogra on January 5, 2014

Dhaka: Bangladesh's ruling Awami League won a violence-plagued parliamentary election whose outcome was never in doubt after a boycott by the main opposition party.

With fewer than half of the 300 seats being contested, voters in modest numbers cast ballots on Sunday amid heavy security in polling that lacked the festivity typical of Bangladeshi elections and was shunned by international observers as flawed.

Either Hasina or BNP chief Begum Khaleda Zia has been prime minister for all but two of the past 22 years. The two are bitter rivals.

The Awami League won 105 of the contested seats, on top of the 127 seats where it ran unopposed, giving it a more-than two-thirds majority. Hasina is expected to form a new government this month.

"The immediate fallout of this dismal voter turnout will be the Hasina government coming under greater pressure to hold talks with the opposition," said Hossain Zillur Rahman, an economist and adviser to a former "caretaker" government tasked with overseeing an election.

"It is the ultimate sign of protest by Bangladeshi people and tells us that they are unhappy with the way elections have been held in this country."

The impasse between the two main parties, which showed no sign of easing, undermined the poll's legitimacy and is fuelling worries of economic stagnation and further violence in the impoverished South Asian nation of 160 million.

"This is a suicidal election as it will not bring any peace in the country," Abul Kashem, who works as a driver and is a supporter of the BNP, said outside a Dhaka polling station.

The country's $22 billion garment industry, which accounts for 80 per cent of exports, has been disrupted by transportation blockades ahead of the election. BNP officials said party supporters would maintain the blockade and called another in a series of general strikes starting on Monday morning.

Police said they had been forced to fire on opposition activists in six incidents.

Apart from a handful of crude bomb explosions, Dhaka was calm. In Satkania, near the port city of Chittagong, a poll official's arms were broken and police were attacked.

Hasina has spoken of holding talks with the opposition on the conduct of future elections which, if successful, could lead to another poll. The BNP had demanded a halt to the current electoral process.

Turnout figures were not yet available; though election officials acknowledged that they had anticipated low numbers and voting appeared slow at Dhaka polling stations.

The BNP said low turnout vindicated its denunciation of the poll as a farce.

"The turnout is a clear indication that the common people rejected this election and it is almost an election without voters," Shamsher Mobin Chowdhury, a BNP vice chairman, told Reuters on Sunday.

Junior Law Minister Mohammad Quamrul Islam said the election was necessary for the democratic process and repeated that another poll could be held anytime in agreement with the BNP.

"But they must stop violence before dialogue for the next elections could start," he told reporters after voting.

The BNP denounces Hasina's scrapping of the practice of having a caretaker government oversee elections. The Awami League says the interim government system has proved a failure.

Many BNP leaders are in jail or in hiding, and Khaleda says she is under virtual house arrest, which the government denies.

The European Union, a duty free market for nearly 60 per cent of Bangladesh's garment exports, refused to send election observers, as did the United States and the Commonwealth, a grouping of 53 mainly former British colonies.

Promoted
Listen to the latest songs, only on JioSaavn.com
"The elections have to happen to ensure a government is formed and the country can start functioning again normally," said Mehedi Rahman, 43, a schoolteacher voting in Dhaka.

"The unfortunate part is there is hardly any meaning because the opposition has boycotted it and the outcome is known."
© Thomson Reuters 2014
Comments
Bangladesh electionsAwami League