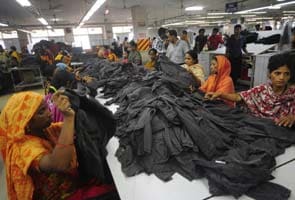 The Geneva talks came after a building housing garment factories collapsed in Bangladesh in April, killing more than 1,100 people. They were aimed at agreeing compensation for the families of those victims and those of other factory disasters.

The disaster placed the international spotlight on the often appalling conditions and the lack of rights for workers at the country's 4,500 garment factories, and retailers responded with a pledge to improve safety.

But the campaign groups that organised the meeting said only around a third of the firms invited had even turned up, with key names including Walmart, Benetton and Mango staying away.

Primark was the only clothing retailer to make a concrete commitment at the meeting, vowing to provide a further three months salary to families affected by the Rana Plaza factory collapse.

The 11 brands that made an appearance were mainly European and also included Bon Marche, Camaieu and Store Twenty One.

"We are disappointed that they didn't commit to an amount," said Ineke Zeldenrust, international coordinator at the Clean Clothes Campaign. "We had hoped to achieve much more."

Organisers, said $74.57 million (56 million euros) would be needed to compensate the Rana Plaza victims for their suffering and lost income.

Another $6.44 million would be needed for the victims of a deadly fire that killed 112 workers at the Tazreen Fashions factories outside Dhaka in November, they said.

Bangladesh is the world's second biggest apparel exporter, with its garment factories accounting for 80 percent of its overseas shipments.

But the industry has been hit by a series of recent disasters highlighting appalling safety conditions at many factories.

In July Bangladesh approved a new labour law to strengthen employees' rights and improve workplace safety, in response to the Rana Plaza collapse.

Promoted
Listen to the latest songs, only on JioSaavn.com
"Consumers will be shocked that almost a half-year has passed since the Rana Plaza disaster with only one brand so far providing any compensation to the disaster's victims," IndustriALL assistant chief Monika Kemperle said in a statement.