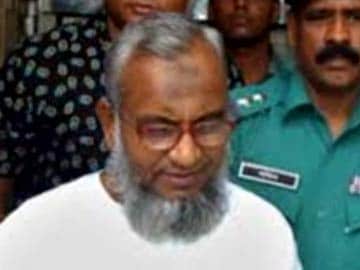 Dhaka: Bangladesh on Thursday hanged a senior Islamist leader known as the "Butcher of Mirpur", making him the first person to be put to death for massacres committed during the country's bloody 1971 war of independence.

"The execution has been carried out," deputy law minister Quamrul Islam told AFP, adding that Abdul Quader Molla, 65, a senior leader of the Jamaat-e-Islami party, was hanged at 10.01 pm (1601 GMT) in a jail in the capital Dhaka.

The hanging took place just hours after the country's Supreme Court dismissed Molla's appeal for a final review of his death sentence, removing the last legal option against his execution.

The wife and children of Molla met the Jamaat-e-Islami leader at a jail in Dhaka for one last time hours before the execution, and found him to be "calm".

"He has told us that he is proud to be a martyr for the cause of Islamic movement in the country," Molla's son Hasan Jamil told AFP after meeting his father.

Security has also been tightened outside the jail gate and in the capital Dhaka, with the authorities deploying paramilitary border guards in key flashpoints.

Islamists and opposition protesters armed with crude bombs and rocks clashed with police in riots in several cities across the country after the Supreme Court announced the brief verdict paving the way for the execution.

Molla was originally set to be hanged on Tuesday night after he refused to seek presidential clemency.

But in a night of high drama a judge stayed the hanging just 90 minutes before the scheduled execution, amid international concern over the fairness of the war crime trials of mainly opposition leaders.

Molla was found to have been a leader of a pro-Pakistan militia which fought against the country's independence and killed some of Bangladesh's top professors, doctors, writers and journalists.

A key opposition official, he was convicted of rape, murder and mass murder, including the killing of more than 350 unarmed civilians. Prosecutors described him as the "Butcher of Mirpur", a Dhaka suburb where he committed most of the atrocities.

Promoted
Listen to the latest songs, only on JioSaavn.com
Hundreds of secular protesters erupted in celebration hearing the news of the execution. They have been camping at Shahbagh square in Dhaka since Tuesday night, shouting slogans including: "Hang Quader Molla, hang war criminals".