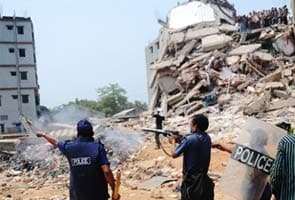 Savar: Bangladeshi police battled today to control huge crowds of garment workers angrily protesting the death of more than 300 colleagues in a collapsed building as rescue efforts stretched into a third day.

Police fired tear-gas and rubber bullets at the workers - who sew clothes for Western brands for as little as 37 dollars a month - as they blockaded roads and attacked factories and buses in textile-making districts around Dhaka.

"The situation is very volatile. Hundreds of thousands of workers have joined the protests," M. Asaduzzaman, an officer in the police control room in manufacturing hub Gazipur, told AFP.

The violence came as the death toll topped 300 at the scene of the accident in Savar town on the capital's outskirts where the eight-storey Rana Plaza building imploded on Wednesday morning, trapping thousands of workers.

The accident has prompted new accusations from activists that Western clothing companies place profit before safety by sourcing their products from Bangladesh, despite its shocking track record of deadly disasters.

British low-cost fashion line Primark and Spanish giant Mango have acknowledged having their products made in the collapsed block, while a host of brands including Wal-Mart and France's Carrefour are investigating.

Last November a blaze at a factory making products for Wal-Mart and other Western labels left 111 people dead, with survivors describing how fire exits were kept locked by site managers.

The US State Department said Thursday that the building collapse underscored "that there's a need for the government, owners, buyers and labour to find ways of improving working conditions in Bangladesh".

More than 2,300 people have been rescued alive since Wednesday, Islam added.

The overnight rescue of 45 people provided some hope to the thousands of anguished relatives who remain huddled at the disaster site, but an intense stench of decomposition suggested many more bodies remain trapped in the rubble.

With many of the country's 4,500 factories already shut due to protests and fears of damage, manufacturers declared Saturday as a holiday and trade unions called a strike for Sunday to demand better working conditions.

"Enough is enough. It's time the government acted. They should save garment workers, not factory owners!" Mosherafu Mishu, a leader of the Garment Workers Unity Forum, told a rally in Dhaka.

Widespread anger has been fuelled by revelations that factory bosses forced workers to return to the building on Wednesday despite cracks appearing in the building the day before.

At the disaster scene, exhausted teams of soldiers, firemen and volunteers worked through the mountain of mangled concrete and steel for a third day after staying on the job for a second straight night.

Amid frustration about the slow pace of progress, at one point thousands of relatives burst onto the disaster site, prompting police to fire tear gas to disperse the crowd.

In the humid conditions, bodies trapped in the rubble were beginning to decay.

"The odour is so foul, sometimes you feel like vomiting. It's difficult to work here 20 minutes at a stretch," said Mohammad Tareq, a garment worker who is one of hundreds of volunteers helping the rescue effort.

While climbing on the upper reaches of the vast pile, Tareq said that one woman called Nasima had begged to be rescued from beneath the rubble and that she was with 15-20 other people.

"We've passed water and fruit juice to them. We hope they will be rescued in the next hours," Tareq told AFP.

At the nearby Enam Medical College Hospital, doctors were struggling to treat the 1,200 people admitted since Wednesday morning, many with missing limbs or with such bad injuries that they required amputations.

Promoted
Listen to the latest songs, only on JioSaavn.com
Police meanwhile made a series of raids to hunt down the factory and building owners after Prime Minister Sheikh Hasina vowed to track them down and bring them to justice.