Dhaka said the troops were mobilised near a thin strip of land between the two countries where around 6,000 Rohingya have been living since fleeing Myanmar in August last year. 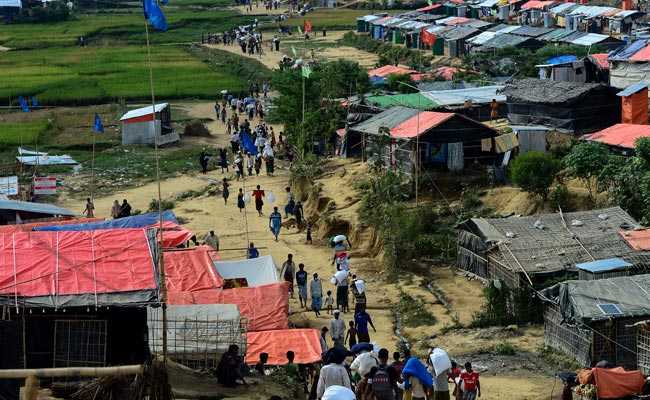 Nearly 700,000 Rohingya refugees from Myanmar are now living in camps across Bangladesh

Tombru, Bangladesh: Bangladesh Thursday asked Myanmar to immediately "pull back" security forces and heavy weapons from the border after the troop build-up near a camp housing thousands of stranded Rohingya stirred tension on the troubled frontier.

The foreign ministry "summoned" Myanmar's envoy and conveyed the country's "concerns" over the "military build-up" amid rising tensions following the influx of nearly 700,000 Rohingya refugees from Myanmar.

Bangladesh's acting foreign secretary "conveyed to the Myanmar ambassador in Dhaka that such military build-up will create confusion within Bangladesh and escalate tensions on the border," the ministry said.

"He told the ambassador to convey to the Myanmar authorities for the immediate pullback of Myanmar security forces along with military assets from the area," it said.

Dhaka said the troops were mobilised near a thin strip of land between the two countries where around 6,000 Rohingya have been living since fleeing Myanmar following a brutal military crackdown on the Muslim minority in late August.

They were among the first to flee Myanmar and set up shelters in no man's land in the weeks before Bangladesh agreed to let the Rohingya into the country.

In recent weeks they have come under pressure from Myanmar soldiers, who have stepped up patrols along the barbed-wire border fence just metres from the camp and broadcast messages using loudhailers ordering the Rohingya to leave.

Hundreds of Rohingya have since fled the camp and taken shelter in refugee settlements in Bangladesh's southeastern border district of Cox's Bazar.

The diplomatic protest came as Bangladesh border guards and Rohingya living on the no man's land said some 100 Myanmar soldiers arrived near the refugee camp Thursday in heavy military vehicles.

"They brought at least 14 ladders and intimidated us by trying to climb over the fences and come to our camp to evict us," Rohingya leader Mohammad Arif told AFP at the Tombru border.

The Bangladesh border guards had requested a meeting with their Myanmar counterparts to deescalate tensions, he said, but were told the officers were "away or busy elsewhere".

The build-up came despite Bangladesh and Myanmar having signed a deal to repatriate some 750,000 Rohingya to their homeland in Rakhine state. But the process was delayed at the last moment due to lack of preparations and protests by the refugees.

Myanmar views the Rohingya as illegal immigrants from Bangladesh and has long denied them citizenship and basic rights.

Bangladesh's foreign secretary has "expressed the concern" that the troop build-up might "hamper repatriation process which both sides agreed to implement".

Promoted
Listen to the latest songs, only on JioSaavn.com
Dil Mohammad, another Rohingya leader, said Myanmar was making "absurd claims" that Rohingya terrorists were hiding in the border camp.