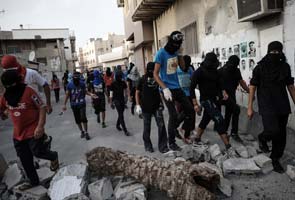 Dubai: Bahrain police were out in force on Sunday to prevent disruption to the Gulf state's Formula One Grand Prix after days of pro-democracy protests off-circuit stole attention from the flagship event.

German Nico Rosberg of Mercedes will start in pole after clocking a best qualifying time of one minute and 32.330 seconds, outpacing fellow German and championship leader Sebastian Vettel of Red Bull by two-tenths of a second.

Spain's Fernando Alonso of Ferrari is third off the blocks.

But the racing has been overshadowed by sometimes bloody clashes away from the circuit which have dragged Formula One bosses into political controversy for a second year in a row.

Police have fired birdshot and tear gas as they fought to contain simmering resentment at a deadly crackdown by the Sunni minority royal family on Arab Spring-inspired protests led by the kingdom's Shiite majority two years ago.

The scenes have renewed controversy over motor racing bosses' decision to keep Bahrain on the Formula One calendar despite similar disturbances that clouded the event last year.

Police were out in force for Saturday afternoon's qualifying session, with armoured vehicles deployed around the capital's Pearl Square, epicentre of month-long pro-democracy protests in early 2011 that were crushed with deadly force.

Hundreds of Shiite demonstrators who attempted to gather in the square on Saturday evening were forcibly dispersed, witnesses said.

Police fired tear gas and chased demonstrators into side streets. Some protesters retaliated with petrol bombs.

Hundreds had taken to the streets in Shiite villages outside Manama overnight Friday, prompting clashes with police, witnesses said.

"Your race is a crime," chanted protesters armed with petrol bombs and stones. "No, no to blood Formula."

Talking to sports correspondents at the desert circuit outside Manama, Bahrain's crown prince admitted there were "issues" affecting the kingdom, which was rocked by deadly unrest in the 1990s and has been hit by renewed disturbances since 2011.

He dismissed criticism from human rights groups that Bahrain was exploiting the Grand Prix in a bid to boost its image and economy.

"We've never used this race to say that everything's fine," Prince Salman said. "We recognise there are issues in the country but they are to be solved in a political process which is well underway."

Prince Salman, who has long been regarded as a moderate voice within the Gulf state's Sunni minority regime, said he was "optimistic" a settlement could be reached with the Shiite-led opposition and acknowledged that protesters against the race had largely refrained from violence.

"I think they were largely peaceful -- people expressing their rights to disagree," he said.

Promoted
Listen to the latest songs, only on JioSaavn.com
Human rights groups say that the political violence in Bahrain has killed at least 80 people since 2011.

Strategically located just across the Gulf from Iran, Bahrain is home base for the US Fifth Fleet and also a major offshore financial and services centre for its oil-rich Gulf Arab neighbours.