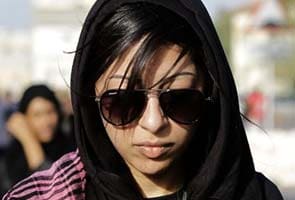 "Zainab was supposed to be released on Tuesday, when her two month sentence came to an end but she was released on Wednesday after orders from the attorney general," Mohammed al-Jishi said.

Ms Zainab, daughter of prominent Shiite activist Abdulhadi al-Khawaja who is serving a life sentence for plotting against the state, was arrested while protesting on August 2.

She was sentenced to two months in prison for destroying property belonging to the ministry of interior, said Jishi.

According to Amnesty International, the government property referred to in the conviction was a "picture of Bahrain's king" which she "allegedly tore" while in detention.

Ms Zainab has been arrested on several occasions by Bahraini police and today faces some 13 separate charges, according to the London-based watchdog.

In May she was released after serving a one month jail term for attacking a policewoman at a demonstration.

She has also paid a 200 dinars ($530) fine for having insulted a police officer.

According to Jishi, Ms Zainab will have to return to court on Thursday, just one day after her release, to face charges of "illegal assembly" that date back to February when she participated in protests commemorating the one-year anniversary of the 2011 Shiite-led uprising against the ruling Sunni dynasty.

Promoted
Listen to the latest songs, only on JioSaavn.com
Ms Zainab has been active in holding anti-government protests since Bahraini security forces brutally crushed the uprising in March of last year.

The kingdom has continued to witness sporadic Shiite-led demonstrations, mostly outside the capital. In total, Amnesty estimates that some 60 people have been killed in protest related unrest since last February.