The zoo is closed because of the pandemic and has not said when it will reopen, but animal keeper Marty Dearie introduced a pre-taped tour of the panda habitat followed by a few moments with the main attraction: Xiao Qi Ji. 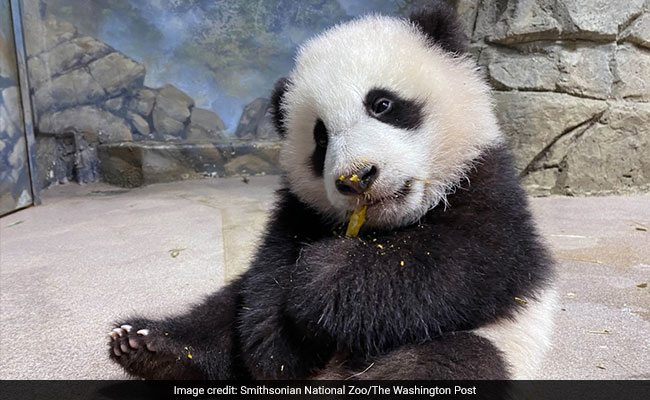 The National Zoo's giant panda cub made its debut Wednesday from the zoo in a five-minute explosion of cuteness confined to a live-stream due to the coronavirus pandemic.

The zoo is closed because of the pandemic and has not said when it will reopen, but animal keeper Marty Dearie introduced a pre-taped tour of the panda habitat followed by a few moments with the main attraction: Xiao Qi Ji.

Zoo officials said viewers would "experience an up-close, real-time look at Xiao Qi Ji as he walks, climbs, tumbles and explores his indoor habitat." Xiao Qi Ji did not disappoint on Wednesday.

Awakened from a nap, he appeared drowsy at first, but brightened up considerably when Dearie placed a few pieces of boiled sweet potato within reach.

Though he mugged a bit for the camera, Xiao Qi Ji eventually ignored legions of online fans to enmesh himself fully in the sweet potato, smearing it all over a toy and himself. This dedication, Dearie said, is helping the panda cub gain a little more than pound per week.

"Apparently, in order to eat sweet potato we need to stand in it," Dearie said. Of another acrobatic panda maneuver, he added: "There's nothing like eating your sweet potato upside-down."

When the potato was gone, Xiao Qi Ji played with toys and battled Dearie in a game of tug-of-war.

Then, it was time to call it a day. Mama Panda was on her way, and Dearie had to make tracks, as animal keepers do not directly interact with adult pandas.

Dearie acknowledged the toll the coronavirus pandemic has taken on panda lovers in the Washington region unable to commune in person with the animals.

"We know this has been a difficult time for everyone," he said. "We hope you have had some joy . . . around the birth of this animal."

The 21-pound panda turned five months old on Jan. 22. His mother is Mei Xiang and his father is Tian Tian. Experts called Mei Xiang's pregnancy "a miracle" because at the age of 22, she had a less than a 1 percent chance of having another cub.

Zookeepers said the cub is "curious yet cautious" and is trying new foods, including the sweet potatoes. He liked them - a lot.

When the sweet potatoes were put on a piece of bamboo, zookeepers said, he "grabbed the bamboo in his mouth, paused for a moment to take in the new taste, then lay back and licked the remainder. When we offered him more, he wouldn't stop nibbling on it."

His main source of nutrition is still his mother's milk. He may "comfort nurse" until he is 18 months old and often does it in the early morning and at night. By age 1, he will start eating more solid foods such as bamboo, carrots, apples and "nutrient-rich biscuits." Soon he will try fruit and softened biscuits, zookeepers said.

Like any baby, Xiao Qi Ji likes to play with toys, including a small red ball. And zookeepers gave him a giant hockey puck to play with one day to mark the Washington Capitals' first game of the season.

For those looking to catch a glimpse of the baby panda online, officials said he's an early riser and is often seen in the morning and early afternoon while zookeepers are cleaning the panda area.

Zookeepers have said Xiao Qi Ji "nibbles on everything from his paws and enrichment toys to mother Mei Xiang's ears."

Often, when his mom is eating bamboo, he playfully bites at her. When his mom is outside in the panda area, Xiao Qi Ji likes to come out of the den and "supervise" the keepers "as they clean and get the habitat ready for Mei Xiang's return," officials said.