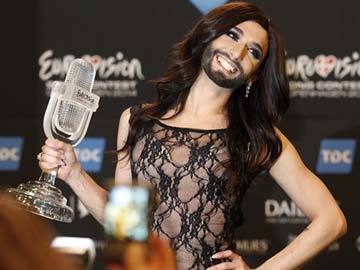 Singer Conchita Wurst holds up the trophy during a press conference after winning the Eurovision Song Contest in the B&W Halls in Copenhagen, Denmark. (AP Photo)

Copenhagen: Bearded drag queen Conchita Wurst and her "Rise Like a Phoenix" song won the Eurovision Song Contest for Austria early on Sunday, with an eye-catching performance.

The 25-year-old performer, whose real name is Tom Neuwirth, took the Eurovision crown in Copenhagen despite initial expectations that the act would be too controversial in socially conservative countries.

It was Austria's first Eurovision victory for 48 years.

"We are unity, and we are unstoppable," his creation Conchita said after winning the glitzy competition with 290 points compared to 238 points for runner-up the Netherlands, in what Eurovision fans had anticipated would be a more closely fought race.

When asked what she would tell Russian President Vladimir Putin -- who last year signed a law banning "gay propaganda" -- Conchita replied; "I don't know if he's watching, but if so, I've made clear, we're unstoppable."

The win was also a victory for all people who believe "in the future of peace and love and tolerance," said Wurst after the live broadcast, where she cried in front of the cameras.

"I said to myself just this time please just let me be the one with the gold," she said.

The Eurovision winner secured most of her "douze points" top scores from western European countries including Britain, Sweden and the Netherlands.

However, she underlined that she also had fans in countries perceived as being more conservative.

"It doesn't depend on a country, there are people ... also in eastern Europe who believe what I believe."

Austria last won Eurovision back in 1966 with "Merci Cherie" by Udo Juergens, and news of the victory was well received by revellers in Vienna.

"It's just great that a guy can perform like a woman like this, he has such a great presence," said Karin Springer, who had gone to a bar with friends to watch the event.

"It's been 48 years since Austria won the Eurovision so it's fantastic to get it back," she added.

Others emphasised the message of tolerance Eurovision was sending to its viewers.

"I think it's important that she won because she represents a different part of society that not everyone accepts," said Fidan Aliyeva from Azerbaijan who recently finished her studies in Austria.

"She proved that in Europe everyone is accepted," she added.

Since the contest was launched in 1956, voting has often been tied to politics and the 2014 event was no exception, with the audience jeering countries that awarded points to Russia.

Azerbaijan and Belarus both gave top marks to Russian entry "Shine" by the Tolmachevy Sisters.

Austria's colourful competitor didn't become one of the bookies' favourites until Thursday's semi-final, amid reports that the drag act had prompted shocked petitions in Russia, Ukraine and Belarus.

Even in Austria, the leader of the right-wing FPOe party had called the act "ridiculous".

"I have very thick skin. It never ceases to amaze me just how much fuss is made over a little facial hair," Wurst told AFP on Friday.

Half the points awarded in Eurovision are compiled through televoting and the other half come from professional juries in each competing country.

Danish public broadcaster DR had transformed a disused shipyard into a purpose-built arena for the event, creating a spectacular stage for a fraction of the price some previous host countries have spent.

The growing popularity of Eurovision, and a desire by some countries to use it as a national showcase, have led to soaring costs, and DR's 190 million kroner (25.5 million euros, $35.4 million) budget was considered relatively modest.

Denmark last hosted Eurovision in 2001, when BBC commentator Terry Wogan courted controversy by dubbing the host couple "Dr Death and the tooth fairy", after mocking them for introducing every song in rhyming couplets.

This year's show came under fire from social media users who said the comedy segments failed to make them laugh.

Promoted
Listen to the latest songs, only on JioSaavn.com
"Ever wondered why Denmark exports gritty crime dramas and not comedy? Eurovision currently providing the answer," British journalist Tim Stanley wrote on Twitter.