At Massachusetts School, 'Lockdown, Lockdown' Is A Nursery Rhyme

A poster in a Somerville, Mass, school caught the attention of Georgy Cohen and her husband, Rick Healey - and it didn't have anything to do with ABC. 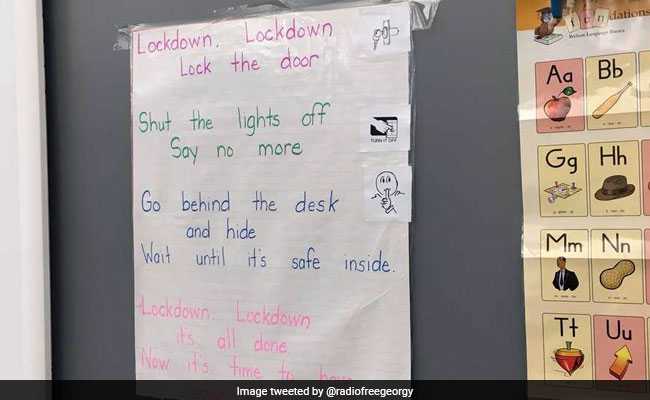 It's not unusual for the walls of a kindergarten classroom to be plastered with colorful posters.

But a poster in a Somerville, Mass., school caught the attention of Georgy Cohen and her husband, Rick Healey - and it didn't have anything to do with ABCs or washing your hands.

Shut the lights off, Say no more

Go behind the desk and hide

Wait until it's safe inside

Lockdown, Lockdown it's all done

Now it's time to have some fun!

Accompanying the text were three images: a lock with a key in it, a hand turning off the lights and a person holding a finger to his lips. The words, meant to be sung, are set to the tune of "Twinkle, Twinkle, Little Star."

Healey told The Washington Post that he and his wife came across the poster while they were visiting the school Wednesday as part of an official tour for parents who plan to send their children to kindergarten in the fall. The couple have a 5-year-old daughter.

He said he was "saddened" to see the poster, but recognizes why the approach may be necessary in an era of school shootings.

"I can understand why it was put to that song, to help kids understand it without panicking," he said. " It's something a 5-year-old can wrap their brain around without having the full meaning behind it apparent to them."

He declined to identify the school, but several news outlets reported that poster was at Somerville's Arthur D. Healey School - no relation to Rick Healey.

In a joint statement, Somerville Mayor Joseph Curtatone and Public Schools Superintendent Mary Skipper said the poem was an example of a teacher's strategy to "help her young students stay calm and remember the key steps they would need to follow during a drill or real emergency," HuffPost reported.

"As much as we would prefer that school lockdowns not be a part of the educational experience, unfortunately this is the world we live in," the statement said.

"It is jarring - it's jarring for students, for educators, and for families," the statement said. "Students in Somerville and across the country know how unnatural this is. Yet we all know that one of the most important roles we have as educators and community leaders is to ensure that all of our students and staff members are safe and prepared in case of an emergency."

According to a Washington Post database, more than 215,000 students have experienced gun violence in schools since the April 20, 1999 mass shooting at Columbine High School. This year alone, there have been nearly 20 shootings. In February, 17 people were killed when a gunman opened fire at Marjory Stoneman Douglas High School in Parkland, Fla. Last month, a shooting at Santa Fe High School in Santa Fe, Tex., left 10 dead.

The "Lockdown" poster in Somerville has drawn mixed reactions.

Cohen tweeted a photo of the poster, adding the message: "This should not be hanging in my soon-to-be-kindergartener's classroom." But later she tweeted a message saying that the school was "doing exactly what they need to be doing." She urged her followers to talk to legislators about the importance of gun reform.

This should not be hanging in my soon-to-be-kindergartener's classroom. pic.twitter.com/mWiJVdddpH

"Jesus, that's to the tune of the alphabet song, and Twinkle Twinkle ... what a horrifying contribution to the songbook," one person tweeted.

Jesus, that's to the tune of the alphabet song, and Twinkle Twinkle... what a horrifying contribution to the songbook.

"I am so sorry for all of you. Kids in Austria only know fire drills. Which amount to a leisurely stroll to the schoolyard ... Thats how it should be," another user wrote.

I am so sorry for all of you..Kids in Austria only know fire drills.Which amount to a leisurely stroll to the school yard...Thats how it should be

Others on social media, said the poster left them feeling said how sad.

This is honestly heartbreaking.

The constant fear about an active shooter has left schools scrambling to do whatever they can to prepare and protect their students, whether that means giving them bulletproof plates that can fit inside backpacks or using nursery rhymes to teach them about lockdowns.

Promoted
Listen to the latest songs, only on JioSaavn.com
"When I was in kindergarten, we had fire drills," Cohen told the Boston Globe. "It was different - we didn't have these same types of threats."