The blast is the latest disaster to hit the poverty-wracked Haiti, riven by gang violence, political paralysis, and acute fuel shortages. 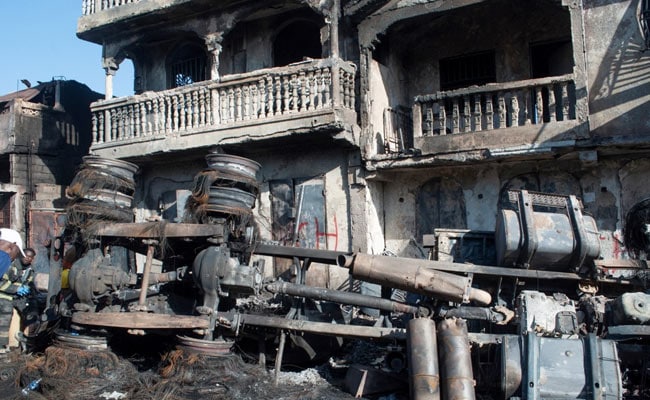 Haiti blast: Fuel had spilled onto the road and pedestrians apparently rushed to collect it.

At least 62 people were killed when a gas tanker truck exploded in the Haitian city of Cap-Haitien on Tuesday morning, a local official said, with overwhelmed medics saying the toll was set to rise.

The blast is the latest disaster to hit the poverty-wracked Caribbean nation, riven by gang violence, political paralysis, and acute fuel shortages.

"We have now counted 62 deaths," Deputy Mayor Patrick Almonor said, adding that authorities were still searching for victims amid the charred debris in Cap-Haitien, Haiti's second-largest city located on the northern coast.

Almonor earlier described a horrific scene at the blast site, saying he had seen more than 50 people "burned alive" and that it was "impossible to identify them."

Scores of people were injured, and Prime Minister Ariel Henry said he was heading to the scene along with extra doctors and health workers.

According to Almonor, the truck is believed to have flipped over after the driver lost control while swerving to avoid a motorcycle taxi.

Fuel spilled onto the road and pedestrians apparently rushed to collect the tanker's gas, a precious commodity as Haiti grapples with a severe fuel shortage caused by the tightening grip of criminal gangs on the capital Port-au-Prince.

Almonor said around 40 houses in the area were also set ablaze, but that no details were yet available on possible victim numbers inside the homes.

Nearby Justinien University Hospital was overwhelmed with patients as the injured were transported to the facility.

"We don't have the ability to treat the number of seriously burned people," a nurse told news agency AFP.

"I'm afraid we won't be able to save them all," she said.

A doctor at the hospital told local radio station Magik9 that two people had died there and that 40 other patients were seriously injured.

"The people are burned on more than 60 percent of their body," he said.

Prime Minister Henry said in a tweet he would visit the injured and "take this opportunity to express my solidarity with the grieving families."

He earlier promised field hospitals would be rapidly deployed to help care for the blast victims.

Henry -- who has led the country since July after president Jovenel Moise was assassinated in a still-mysterious plot -- declared a period of national mourning following the explosion.

Haiti has never produced enough electricity to meet the needs of its population. Even in well-off parts of the capital, the state-run Haiti electric utility only provides, at most, a few hours of power a day.

Those who can afford it rely on pricey generators, which are no help in the face of the fuel shortage caused by gangs blocking access to the country's oil terminals in the capital and its outskirts.

In recent months, more than a dozen vehicles transporting fuel have been attacked by gangs demanding ransoms for the drivers' release.

Demonstrators took the streets as recently as Monday protesting the rise in gasoline prices.

The lack of fuel is also hitting water access, in a country where many people rely on private companies to deliver water by truck to at-home systems.

And with no guarantee of steady power or water supply, health care providers have been forced to drastically cut back their services.

Chronically-unstable Haiti was also plunged into a new political crisis with the assassination of president Moise.

Four senior Haitian law enforcement officials have been detained and several dozen arrested in connection with the investigation. But five months after the assassination, doubts remain over who ordered the attack.