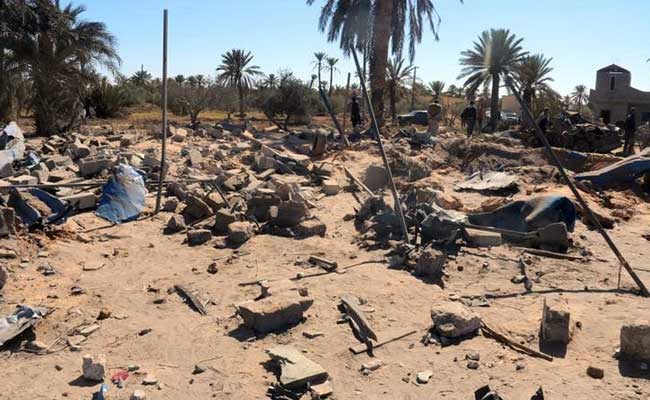 At least 42 people were killed and dozens wounded in an air strike targeting a town hall meeting in southern Libya, a local official and the UN-recognised government said Monday, accusing forces of military strongman Khalifa Haftar.

The Government of National Accord (GNA) said Sunday's raid struck the residential district of Qalaa in the town of Murzuq.

He said a government building at which more than 200 local dignitaries were gathered "to settle social differences" was targeted three times.

"No armed or wanted people were among them... Haftar bombed unarmed civilians," he said, calling for humanitarian aid since the local hospital could not cope with the high number of casualties.

The GNA condemned the attack on its Facebook page, also blaming it on Haftar's forces.

Haftar, who seized swathes of southern Libya earlier in the year, has been battling since April to oust pro-GNA forces from the capital Tripoli.

The GNA urged the UN's Libya mission and international community "to carry out an investigation into the crimes committed by Haftar's militias in Murzuq".

There was no immediate comment on the raid from Haftar's self-styled Libyan National Army (LNA).

With its 50,000 inhabitants, mostly from the Toubou ethnic group, and its ancient fortress, the oasis town is located almost 900 kilometres (550 miles) by road south of Tripoli.

The Toubou have remained at odds with rival Arab tribes which have rallied with Haftar's forces who took control of the region in January in an operation to "purge it of terrorists and criminals".

With fighting for Tripoli stalled on the ground after initial advances by Haftar's forces, the two sides have increasingly taken their fight to the skies with warplanes and drones.

Aviation officials said Monday that a Libyan passenger plane had narrowly escaped being hit by incoming fire as it landed at Tripoli's sole functioning airport.

"The crew on the flight from Benghazi, which was carrying 124 passengers, avoided being hit by bombing on Mitiga International Airport" on Sunday, the airport's management wrote on Facebook.

The incident forced the airport to close to air traffic and re-route flights to Misrata, some 200 kilometres further east, until late Sunday night.

The origin of the bombs was not clear, and no side has yet claimed responsibility.

"Several of these attacks have come perilously close to hitting civilian aircraft with passengers on board," he said.

On Sunday, his office condemned the "repeated indiscriminate shelling" of Mitiga, "the only indispensable functioning airport available for use by millions of civilians" and aid deliveries.

Mitiga has closed several times since the start of the assault by Haftar, who has accused pro-GNA forces of using it for military purposes including as a launch site for Turkish attack drones.

Located east of Tripoli, Mitiga is a former military airbase that has been used by civilian traffic since Tripoli's international airport suffered severe damage during fighting in 2014.

The World Health Organization says the battle for Tripoli has left nearly 1,100 people dead and wounded more than 5,750, and forced more than 100,000 civilians to flee their homes.

Libya has been wracked by chaos since the 2011 uprising that killed president Moamer Kadhafi.

Rival administrations and militias are vying for power, with the GNA that holds Libya's west at odds with a parallel administration based in the east and backed by Haftar.