Authorities added that there had been reports of people impersonating law enforcement officers in communities such as Kingwood, falsely telling people they needed to evacuate. 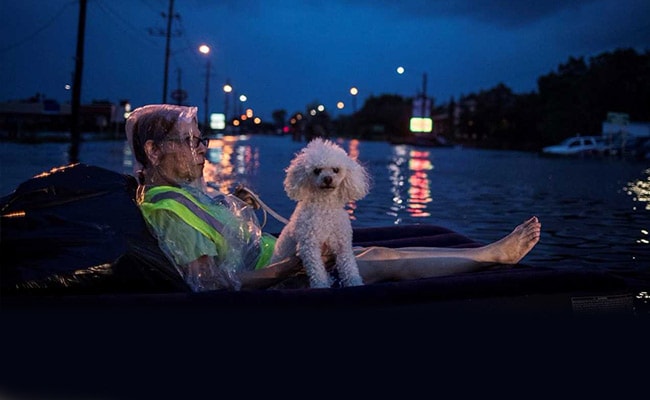 After more than 50 inches of rain over four days, Houston was less of a city and more of an archipelago

Houston: The biggest rainstorm in the history of the continental United States finally began to move away from Houston on Tuesday, as the remnants of Hurricane Harvey and its endless, merciless rain bands spun east to menace Louisiana instead.

But, after more than 50 inches of rain over four days, Houston was less of a city and more of an archipelago: a chain of urbanized islands in a muddy brown sea. All around it, flat-bottomed boats and helicopters were still plucking victims from rooftops, and water was still pouring in from overfilled reservoirs and swollen rivers.

Between 25 and 30 percent of Harris County - home to 4.5 million people in Houston and its near suburbs - was flooded by Tuesday afternoon, according to an estimate from Jeff Lindner, a meteorologist with the county flood control district. That's at least 444 square miles, an area six times the size of the District of Columbia. 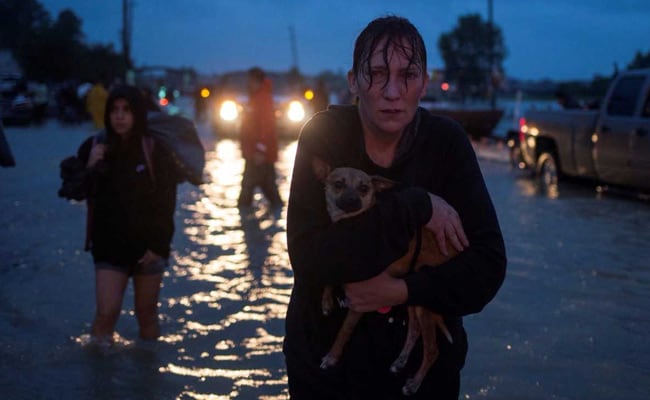 Authorities added that there had been reports of people impersonating law enforcement officers in communities such as Kingwood, falsely telling people they needed to evacuate.

On Tuesday morning authorities discovered the body of a Houston police officer who had drowned in his patrol car two days earlier, at the storm's height. Sergeant Steve Perez, a veteran officer, was on his way to work on Sunday morning - spending two and a half hours looking for a path through rain-lashed streets - when he drove into a flooded underpass.

Houston Police Chief Art Acevedo said that Perez's wife had asked him not to go in that day. He went, Acevedo said, "because he has that in his DNA." 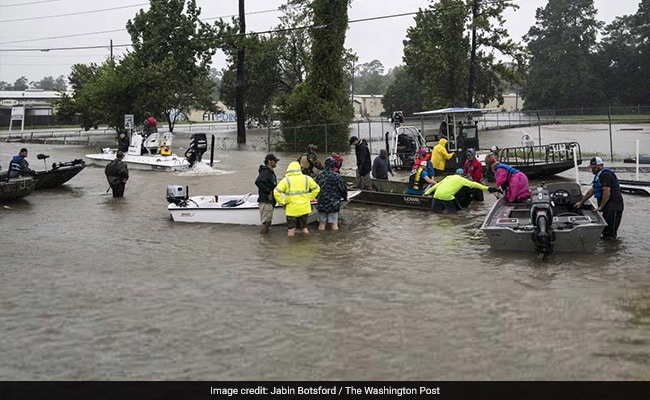 In all, authorities said at least 22 people had been confirmed dead from the storm. But they said it was difficult to know how many more were missing. They also said it is too early to assess the total number of homes and other buildings damaged, in part because rescue crews were still having trouble even reaching some areas because of flooded or flood-damaged roads, said Francisco Sanchez, spokesman for the Harris County Office of Homeland Security and Emergency Management.

"We're still in the middle of the response," he said.

Authorities said more than 13,000 people had been rescued from floodwaters, according to the Associated Press, but that number was surely low. Many had been rescued by strangers with boats, who had rescued so many that they themselves had lost count. They left behind homes that could be flooded for days, or weeks, and perhaps lost forever.

Officials said more than 13,300 people were already in shelters. Federal authorities estimated that 30,000 people could be forced from their homes in Texas and surrounding states.


Video: Volunteers continued to brave the rain to rescue residents trapped in their homes. As many as 30,000 may be forced to go to shelters due to the storm's devastation. (Dalton Bennett, Whitney Shefte/The Washington Post)

Federal authorities estimated that 30,000 people could be forced from their homes in Texas and surrounding states.

All around Houston on Tuesday, the helping and the helpless repeated the same thing.

"I've lived here since 1994, and it's never been this high," said Bonnie McKenna, a retired flight attendant living in Kingwood, along the raging San Jacinto River on Houston's northeast side.

McKenna's house was dry, but down the street rescue boats were unloading neighbors rescued from flooded streets nearby. McKenna didn't have a boat.

But she did have a blanket.

She cut it into quarters, and offered them to soggy evacuees when they got off on dry land.

"I'm thankful it didn't come to my house, but I'm very sad for the people who have just lost everything," McKenna said.

President Donald Trump flew to Texas on Tuesday, and he visited both Corpus Christi - near where the storm made landfall - and state officials in Austin. At one point, he shouted a message to a crowd outside a fire station in Corpus Christi.


Video: Houston residents evacuate their homes amid Harvey flooding after a reservoir spilled over for the first time in history. (Dalton Bennett, Whitney Shefte/The Washington Post)

"This is historic, it's epic what happened. But you know what, it happened in Texas and Texas can handle anything," he told the crowd, which applauded his remarks and cheered more loudly when he waved the Texas state flag.

The Department of Labor on Tuesday announced that it had approved an initial $10 million grant to help with cleanup efforts in Texas. Trump on Monday declared "emergency conditions" in Louisiana, where the storm was headed next.

Before Harvey struck this weekend, the biggest recorded rainstorm in the continental U.S. had been Tropical Storm Amelia, which dumped 48 inches on Texas in 1978 (even larger storms have been recorded in Hawaii).

Harvey - which drifted out of the jet stream and spun around Houston like a top - smashed the record. By Tuesday afternoon, a rain gauge near Mont Belvieu, 40 miles east of Houston, had recorded 51.9 inches of rain.

Over Harris County alone, Lindner estimated that more than a trillion gallons of rain fell. That was like letting Niagara Falls run full-blast onto Houston for 15 days straight.

The water rushed off the concrete of the expanding city, and overwhelmed the meandering bayous that were its natural path to the sea. The hardest-hit areas were often in the south and southeast, the downstream end of the waterways.

But the water was everywhere: a map of flooded streets, compiled by the Houston Chronicle, showed a city dotted with blue. There were concentrations to the west of the city, too, where water had filled up two enormous upstream reservoirs, named Addicks and Barker, that were built to shield the city from floods like this.

Officials released water from those reservoirs to ease the pressure, but at least one of the reservoirs still overtopped its banks. More than 3,000 homes were flooded around the reservoirs.

They may remain flooded for some time. The Army Corps of Engineers said it would continue to release water from the reservoirs for weeks, to make room in case another rain comes.

"We're still in tropical storm season," said Edmond Russo, an official with the Corps of Engineers.

Across Texas, the storm has shut down 14 oil refineries, causing damage at some that released harmful chemicals.

In Crosby, Texas, a fertilizer plant was in critical condition Tuesday night after its refrigeration system and inundated backup power generators failed, raising the possibility that the volatile chemicals on the site would explode.

Arkema, a maker of organic peroxides, evacuated all the personnel from the plant and was attempting to operate the facility remotely. The material must be kept at low temperatures to avoid combustion.

Around the city, schools and universities were closed, with some unable to say when they would reopen.

The George R. Brown Convention Center downtown had taken in 10,000 people as of Tuesday morning, said Turner. That number is double the center's anticipated capacity of 5,000.

The convention center is the landing site for all air evacuations, Charles Maltbie, a regional disaster officer for the Red Cross, and bus evacuations are being diverted to other shelters. When asked what the center's top capacity is, he said: "We will meet the need."

Some of the evacuees at the center will be moved to a new shelter at the Toyota Center, Turner said.

About 250 miles to the north, the city of Dallas was preparing to take at least 6,000 evacuees from the Houston area, according to Dallas County Judge Clay Jenkins, the county's top official. There were showers. Phone-charging stations. There was a dining hall manned by volunteers, including the Texas Baptist Men and local Israeli-American and Muslim-American groups.

The Dallas shelter was still mostly empty on Tuesday because the storm was too bad to get evacuees out of Houston.

Dallas housed 28,000 evacuees after Hurricane Katrina in 2005, Jenkins said. He said he's not sure if that many will come this time.

"We don't know what we'll get," he said, "until the water recedes."

That was the future. In Houston on Tuesday, the city's islands were still busy with the present.

Evacuees came by helicopter, by truck, by pool float. They were brought in by the National Guard, by the fire department, by volunteers from the "Cajun Navy," and by a crew of brewery employees who had once bought a surplus military truck on a lark and now used it to rescue their neighbors.

As the rain began to subside, and some bayous began to recede, both those who were saved - and those who did the saving - began to reflect on what comes next.

One of them was Tom Cullen, 54, who had rushed over to save his parents on Sunday, as their backyard filled with water. He drove his Ford pickup until the truck couldn't go further, hitting hip-deep water.

Then he took a one-seat kayak he'd borrowed from a neighbor. He got both his parents - ages 81 and 88 - into the kayak, then into the truck, and then safely home.

Cullen eventually sat down and cried.

"When I think of what could have happened, reality just hit me right there," he said, his voice breaking. "With all they have done for me since I was born, there was no way I wasn't going over there. Anyone would do the same for their parents."

The home his parents left behind is filled with more than 4 feet of water. It is still rising, he said.


(Except for the headline, this story has not been edited by NDTV staff and is published from a syndicated feed.)
Comments
Hurricane HarveyHouston Flood DeathsHouston Night Curfew