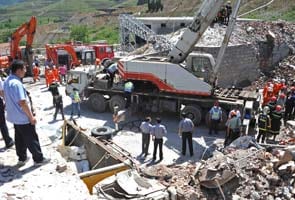 Beijing: A massive blast ripped through an explosives factory on Monday in eastern China, killing at least 12 people and leaving others buried in the debris, state media reported.

Rescuers were taking care to avoid setting off additional explosions as they searched the site of the explosion in Shandong province's Caofan township, the China News Service said. The company website said the factory, run by the Baoli group, manufactures 10,000 tons of industrial explosives annually.

The force of the blast flung broken glass, smashed concrete, and other debris as far as 200 meters (660 feet), reports said. Walls in outlying buildings were flattened and glass shattered.

A total of 34 people were inside the factory at the time of the blast, and survivors were rushed to a hospital. The cause of the blast and condition of those injured were not immediately known.

A government spokesman for the surrounding city of Zhangqiu said a full accounting of the dead and injured was being compiled and would be released. Like many Chinese bureaucrats, he would only give his surname, Cao.

Promoted
Listen to the latest songs, only on JioSaavn.com
China has sought to tighten access to explosives used for quarrying following a series of attacks by people using homemade bombs. However, safety rules are often ignored and industrial accidents remain common.