Astronomers Discover An Ancient Exploding Star After A 30-Year Search

The finding suggests that nova and dwarf nova are different stages of the same star - like a caterpillar morphing into a butterfly. 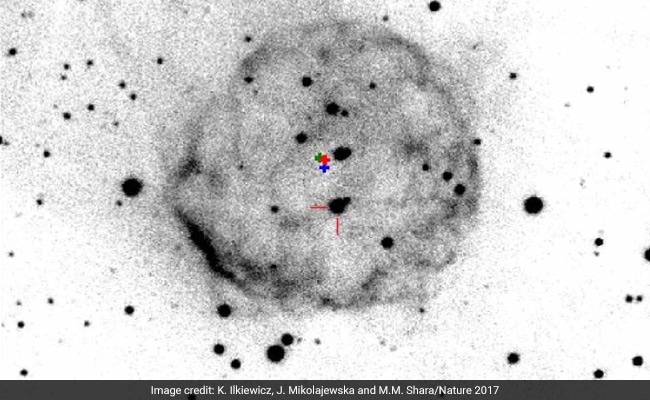 What seemed to be a new star blazed into existence on March 11, 1437. The galactic newcomer was witnessed by Korean royal astronomers, among the few people taking notes about the stars in the early 15th century. They recorded the spot in the night sky and reported that 14 days later, the flare vanished from its perch in the constellation Scorpius.

It disappeared too quickly to be a supernova, or a fiery solar death rattle. Instead, the Korean astronomers had discovered what's called a classical nova. Stars do not need to perish to produce explosive events. During a nova, a white dwarf star sucks in hydrogen from a neighboring star, sheathing itself in a layer of stolen gas. Pressure builds into cataclysm. In 1437, this dwarf ejected its hydrogen shell in a flash so bright it could be seen from Scorpius to Seoul.

Nearly 600 years later, the nova is no longer 300,000 times as bright as the sun. But it still holds astronomers' attention. Michael Shara, an astrophysicist at the American Museum of Natural History, has hunted for this ancient nova for nearly three decades. Modern interpretations of the Korean maps indicated that the nova sat between two particular stars in Scorpius's tail. So there the astrophysicist looked.

"I used every tool and technique that astronomers had developed," Shara said, "and just came up completely empty-handed." But, on a hunch, he shifted his hunting grounds to the next pair of Scorpius stars. He found the remnants of the eruption - the white dwarf and its erupted shell - within 90 minutes.

"It was just sitting there, staring at me all that time," he said. Shara said he felt a wave of conflicting emotions. "It's simultaneously dancing around the office," and, because he'd been so close for so long, "pounding myself on the head, going, 'Damn.' "

In the journal Nature on Wednesday, Shara and his colleagues describe imaging the nova from the Las Campanas Observatory in Chile last year. They also traced its past location via glass photographic plates, astronomical records kept from 1885 to 1993, now digitized at Harvard.

From the Harvard plates, Shara calculated that the white dwarf was moving perpendicularly to Earth. "We know how many arcseconds per year it's moving across the sky," he said. He used the motion of the star to retrace the star's path - the first time, to his knowledge, anyone has used the proper motion of a star this way. As he wound back the clock 580 years, the migrating white dwarf ended up smack in the middle of the discarded shell.

University of Pisa astronomer Steven N. Shore, in accompanying commentary in the journal Nature, called the research "a lovely piece of historical scholarship."

What's more, plates from the 1940s demonstrated that the star system is still active. The nova had become a dwarf nova. (Dwarf novas are far less bright than classical novas, but their eruptions repeat, blinking on and off over the course of months or years.) In the 1980s, Shara had predicted that novas, novalike systems and dwarf novas were the same stars in different stages of an eruption cycle. This star, he said, offers evidence that he's right.

"Just like caterpillars and butterflies are different stages of development" of one organism, Shara said, the hibernations and eruptions of these binary star systems are cyclical. A white dwarf star gathers hydrogen from its neighbor for 100,000 years, erupts, hibernates, goes through a dwarf-nova stage - and does it all over again, possibly for a billion years. The white dwarf, which so dramatically shed its hydrogen skin in 1437, will do so again.

(This story has not been edited by NDTV staff and is auto-generated from a syndicated feed.)
Comments
Ancient Exploding StarKorean royal astronomersclassical nova