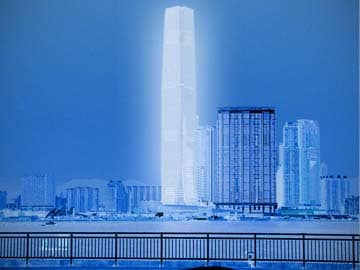 This handout composite image created in 2014 shows a rendering of Carsten Nicolai’s a (alpha) pulse over the ICC building. Hong Kong's tallest building will be transformed into a glowing art installation, with the second instalment of the Art Basel fair

Hong Kong: Hong Kong's tallest building will transform into a glowing art installation this week, a beacon showing off the city's ambition to be recognised as a major cultural hub with its second Art Basel fair.

With its knack for bringing in a global mix of wealthy buyers, artists, gallerists, VIPs and celebrities, the five-day show is the catalyst to a champagne-soaked itinerary of art fairs, exhibitions and happenings.

German artist Carsten Nicolai was commissioned by Art Basel to turn the 118-storey International Commerce Centre (ICC) on the Kowloon peninsula into a glowing installation called "(alpha) Pulse", one of many art events scheduled around the fair's opening.

Along with an installation by British artist Tracey Emin illuminating the city's historic Peninsula hotel, such displays are a flashy signal of intent by Hong Kong, the world's third-biggest auction market behind New York and London.

Hong Kong Art Basel, which begins Wednesday at the city's harbour front convention centre, will this year bring together 245 participating galleries -- half coming from Asia and Asia-Pacific.

"One of the biggest contributions that we're able to make is to raise the profile of Hong Kong above and beyond being a centre for finance and retail," Art Basel director for Asia Magnus Renfrew told AFP.

"Because we are an event of this scale, we've really been able to help generate discussion around art in the city," he said, adding that he sees "huge" growth potential in the Asian art scene.

"The art market tends to follow the money and the greatest creation of wealth at the moment is in Asia," Renfrew said.

The city's "art week" beyond the fair will also include the unveiling of an outdoor sculpture studded with 8,000 Swarovski crystals by London duo Patrik Fredrikson and Ian Stallard.

Provocative US performance artist Ryan McNamara -- whose previous works have included singing songs while buried to his neck in a forest and licking Louis Vuitton bags at the brand's New York boutique -- will also carry out his latest work.

The five-day event also enables the city's own artists to be highlighted on a number of different platforms.

Renfrew said that Art Basel would direct its VIPs to more than 150 art events, giving greater exposure to the local scene.

Nadim Abbas's mixed-media installations have led to recent shows in New York, Singapore and London and his "Apocalypse Postponed" piece for the fair's pop-up bar will be unveiled this week.

Lee Kit is another local star, whose practice encompasses painting, drawing, video and installation and was selected to represent Hong Kong at the 2013 Venice Biennale.

"By building up awareness, excitement and opportunities around art in the city, (Art Basel) can also help lead to the increased support of the field in general," said Claire Hsu of the Asia Art Archive, a locally based non-profit group documenting the recent history of contemporary art in the region.

"How the community leverages this energy for the rest of the year is the key."

With galleries paying for a space at the fair, the hope is that their artists can gain greater exposure and better contacts among collectors in the wider art world.

However, for the Hong Kong-based Schoeni Gallery, which represents a variety of local artists, the experience of attending Art Basel's first instalment in the city in 2013 was mixed.

"Our (expectations) weren't quite met in terms of meeting new faces," gallery director Nicole Schoeni told AFP. Despite the fair offering a global platform for the local art scene, "there wasn't enough of an exchange between new collectors and local galleries," Schoeni said, adding that she expects this to improve as the fair grows.

Art Basel last year replaced Art HK, Hong Kong's former art fair that was set up in 2008 before being taken over by the high-profile Swiss Art Basel franchise.

Gagosian, White Cube, Acquavella, Lehmann Maupin and Pearl Lam are just some of the big-name galleries to have arrived in the city in the past two years, despite its crushing property costs.

The local art scene is also buzzing, with landmark heritage buildings in the Central district recently repurposed to accommodate artists and designers.

Promoted
Listen to the latest songs, only on JioSaavn.com
The government is also developing an entire art and culture district on the waterfront in Kowloon where contemporary art museum "M+" is expected to boast a world-class art selection.

"We are definitely at a very exciting moment," said Hsu. "There is a general sense that while Hong Kong is already a well-established art market, it is at a new stage in its development as an influential centre for new thinking around art."