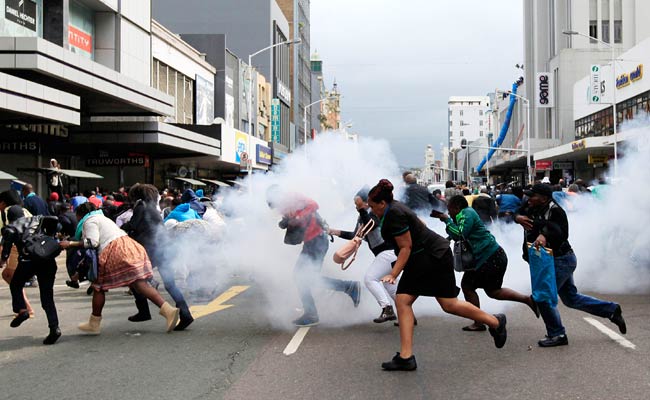 People take cover from tear gas as thousands of people take part in the "peace march" against xenophobia in Durban, South Africa, on April 16, 2015. (AFP)

Johannesburg: South African police fired rubber bullets and tear gas on Thursday to disperse anti-immigrant protesters in Johannesburg, as the country's president called for a halt to a wave of violence directed at foreigners.

Around 200 protesters, shouting that they wanted immigrants to leave, had pelted passing vehicles and police with rocks in an eastern suburb of the country's biggest commercial city, triggering the show of force.

At least four people have been killed in the unrest that started two weeks ago in Durban, a major port on South Africa's Indian Ocean coast where further clashes broke out on Thursday.

Violence flared days after Zulu King Goodwill Zwelithini said in remarks reported by local media that foreigners should leave South Africa. He has since said his comments were misinterpreted.

The foreign ministry of China, a major trade partner, said Chinese-run shops had been damaged in Johannesburg. The Chinese consulate lodged a protest with the police and asked that they ensure the safety of Chinese people.

Johannesburg was the epicentre of anti-foreigner attacks in 2008 that killed more than 60 people as locals vented frustrations over various issues, particularly the high level of unemployment that plagues Africa's most advanced economy.

Addressing parliament in Cape Town on Thursday, President Jacob Zuma reiterated his condemnation of the violence, calling it a "violation" of South Africa's values.

"No amount of frustration or anger can ever justify the attacks on foreign nationals and the looting of their shops," he said. "We condemn the violence in the strongest possible terms. The attacks violate all the values that South Africa embodies."

Zuma also said the government was taking steps to secure its porous borders and making progress in setting up a Border Management Agency, announced last year and scheduled to be up and running in 2016.

South Africa has erected safe camps for fleeing immigrants whose shops were looted and burnt in Durban, where hundreds of people took part in a peace march on Thursday.

Only a few blocks away, however, fresh skirmishes broke out between foreign nationals, locals and police.

The violence may also be fanning anti-South African sentiment abroad.

Petrochemicals group Sasol said Mozambican employees of service providers for one of its gas projects in Mozambique were "protesting about the presence of South African employees" although there had been no cases of violence.

Separately, an industry source said Mozambican employees at a sub-contractor for mining group Vale had become "hostile" to South Africans working on the Moatize project in that country but there had been no violence.

It was not clear if the incident occurred at the coal mine or the railway part of the project and Vale officials declined to comment.

Promoted
Listen to the latest songs, only on JioSaavn.com
South Africa, with a population of about 50 million, is home to an estimated 5 million immigrants, from African countries including Somalia, Ethiopia, Zimbabwe and Malawi, and from further afield, including China and Pakistan. Many own shops or sell wares as informal hawkers on street corners or in markets.

Periodic outbreaks of anti-immigrant violence have been blamed on high unemployment, officially around 25 percent although economists say in reality much higher, widespread poverty and glaring income disparities.
© Thomson Reuters 2015