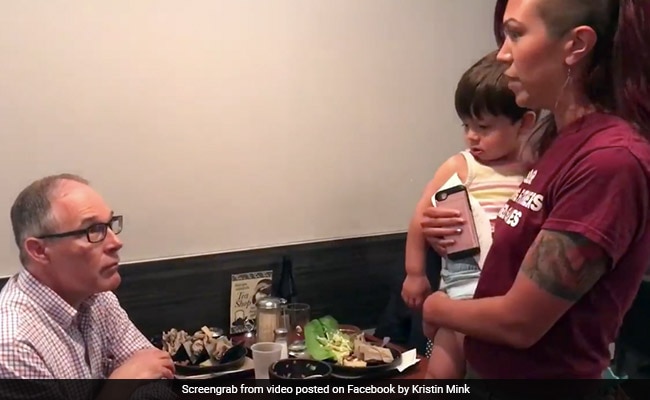 Kristin Mink said she was three tables away with her child from Scott Pruitt at the restaurant.

A woman confronted EPA chief Scott Pruitt at a Washington restaurant and called on him to resign -- the latest time an official from President Donald Trump's administration has come under fire while dining out.

Kristin Mink posted a video of the encounter with the Environmental Protection Agency administrator on her Facebook page, writing that he "was 3 tables away as I ate lunch with my child. I had to say something."

"I just want to urge you to resign because of what you're doing to the environment," Mink, whose Facebook page identifies her as a high school teacher, told Pruitt.

"We deserve to have somebody at the EPA who actually does protect our environment, somebody who believes in climate change and takes it seriously for the benefit of all of us, including our children," she said, holding her toddler as she spoke.

Pruitt has made it his mission to slash environmental regulations since taking over the EPA.

"So, I would urge you to resign before your scandals push you out," said Mink said, who at times during the video read from notes on a piece of paper.

Pruitt, who has come under fire for scandals including allegedly using his position to seek employment for his wife and receiving a discount on a condo rental linked to a lobbying firm, did not respond, and text at the end of the video said that he "fled the restaurant before I got back to my seat."

The EPA chief was not the first Trump administration official to face a public backlash at a restaurant.

White House spokeswoman Sarah Sanders was asked to leave a restaurant in Virginia, while senior White House aide Stephen Miller was branded a "fascist" by an angry patron during a visit to a downtown Mexican eatery.

And Homeland Security Secretary Kirstjen Nielsen made a quick exit when leftist protesters marched into another Mexican restaurant chanting "Shame!" She also confronted angry activists at her home in the suburb of Alexandria.