Another Diplomat Gets Brain Injury In Cuba: What We Know So Far

The newest case marks the 13th time a Canadian officer or family member has reported these "unusual health symptoms." More than 20 Americans have also been affected. 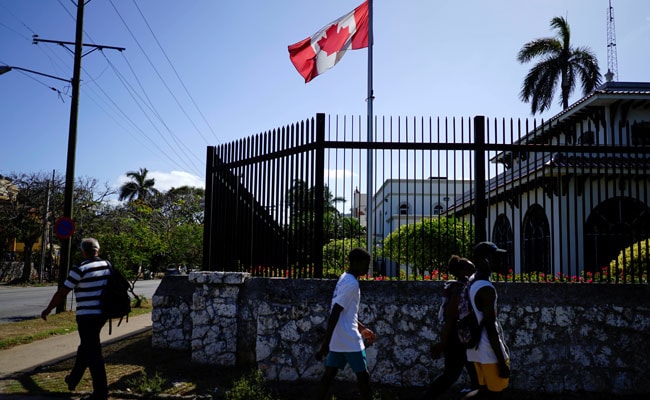 Last week, another Canadian diplomat was diagnosed with a mysterious disease so weird it's been referred to in some circles as "the thing."

The illness afflicts only government employees from the United States and Canada. Sufferers report feeling pulsing or hearing a ringing in their ears. Then headaches, dizziness, trouble concentrating and struggles to remember basic words and facts.

Diplomats have been complaining about "Havana syndrome," named for the city where nearly all the victims were based, for two years. And it certainly seems like they've been targeted by a hostile government or rogue officials. But, though the United States has sent CIA and FBI officials to investigate, we know very little about what's happening or who's behind it.

The newest case marks the 13th time a Canadian officer or family member has reported these "unusual health symptoms." More than 20 Americans have also been affected. In light of this news, the Canadian government has said it will allow all staff posted in the Cuban Embassy to return home "if they wish."

When was the first case reported?

On December 30, 2016, a CIA agent operating in Cuba stopped by the U.S. Embassy's health office. According to the New Yorker, the patient described "strange sensations of sound and pressure while in his home, followed by painful headaches and dizziness." About a week later, the spy was back in the health office, complaining of another attack.

American officials told the New Yorker they weren't sure how seriously to take things at first. "It's like serial killers," one former State Department official said. "It usually takes three or four before police conclude 'Wait a minute, these are connected.' "

Soon, though, the pattern emerged. By February, two more CIA officers reported the same strange sensations. By spring, 16 people had reported symptoms. By the fall, another five Americans were afflicted. The attacks were unusual - some people reported hearing sounds; others said they felt a pulsing, followed by a severe pain. People were afflicted at home, in hotel rooms, in temporary residences several floors above the ground.

Around the same time, some Canadian officials began to report some strange symptoms. A Canadian diplomat and his wife were awakened one night by a feeling of waves of pressure. Their children had nosebleeds. Eventually, as many as 12 Canadians were afflicted by the symptoms.

In response, Canada's foreign service began warning staff against bringing their family on assignment. The government also began housing the diplomats together, far from their U.S. counterparts. Initially, it seemed the attacks had stopped, at least until this newest case was announced.

Is the problem isolated to Cuba?

At least one American government official (a Commerce Department employee named Catherine Werner) reported being stricken one night in Guangzhou, China. That alarmed U.S. officials enough that they had government doctors evaluate 300 employees; 15 showed symptoms and were sent to the University of Pennsylvania for further tests. One of the evacuated Foreign Service officers, Mark Lenzi, told The Washington Post he and his wife began hearing what sounded like "rolling marbles with static" in April 2017. He started to suffer excruciating headaches a couple of months later.

Once in Pennsylvania, 14 of the patients were determined to have been "unaffected," according to the New Yorker.

The Chinese government said it conducted an investigation and found "no cause or clues that would lead to the situation mentioned by the United States."

What do experts think is going on?

No one knows for sure. Victims reported headaches, dizziness, confusion and the inability to think straight. Doctors who've conducted brain scans of the victims say it looks as if they suffered a concussion without the preceding traumatic injury.

It's unclear how the victims might be suffering these injuries. Some have posited that the assailants are using a "sonic weapon," but US investigators have allegedly ruled out the possibility that the injuries were caused by the sounds themselves. Other experts - including a senior doctor who examined the victims - have suggested microwave rays, though it's unclear how they would be targeted so precisely. But as The Post reported, "no microwave weapon that affects the brain is known to exist."

Others, including a specialist in neuro-weapons at Georgetown University, suggested a device that emitted radio frequencies or electromagnetic pulses that enter through the ears of the victim. ("Structural variations within their heads could help explain why some heard sounds while others didn't," the New Yorker explained.)

Who could be behind the attacks?

It's unclear, though officials have a couple of ideas.

Some suspected Cuban hard-liners loyal to Fidel Castro, acting covertly to try to disrupt the normalization of relations. But if that's what's going on, experts say, the dissidents are probably acting in conjunction with another hostile government. For one thing, the CIA has said it doesn't know what kind of weapon could cause these symptoms; the team that developed it would probably have access to sophisticated machinery.

That leaves a couple of prime suspects: China and Russia. Many say Moscow is the most likely culprit. Russia as had a covert weapons program for decades, and the United States says the country once tried to harness microwave radiation for ill.

One government most people think is innocent: Cuba. Washington and Ottawa have found no evidence that the Cuban government is involved. Havana has vigorously denied that it has had anything to do with what's going on and has worked with international teams to get to the bottom of it.