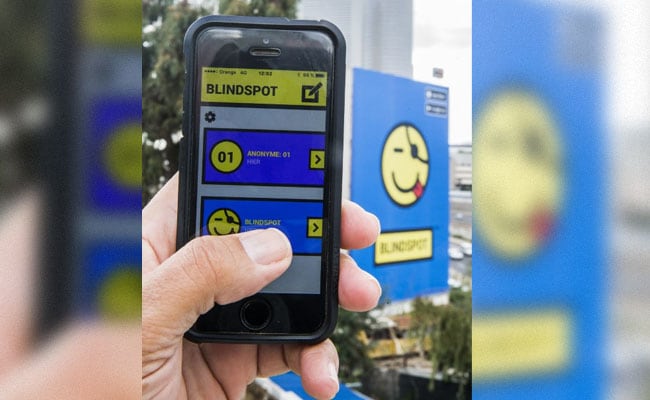 The launch of Blindspot, owned by an Israeli firm, has been accompanied by the largest campaign for a new app in the country's recent history, said Moran Bar, CEO of the Israeli blog Geektime. (AFP Photo)

Tel Aviv, Israel: A new Israeli application launched by a company with investors including Will.I.Am and Nicki Minaj has been accused of encouraging teen bullying and Internet trolls.

The Blindspot app allows users to send anonymous messages, photos and videos to their contacts without the receiver being able to trace it.

It has shot towards the top of the charts in Israel but caused controversy -- with politicians and campaigners calling for it to be banned as it could feed online bullying.

A committee of the Israeli parliament on Monday criticised the app, which the company says has had over half a million downloads since it was launched in late December.

The brother of the country's most famous model, Bar Rafaeli, is one of the figures involved in Blindspot, which is due to be launched in the United States and Europe in the coming months.

The launch of Blindspot, owned by an Israeli firm, has been accompanied by the largest campaign for a new app in the country's recent history, said Moran Bar, CEO of the Israeli blog Geektime.

Adverts showing a yellow smiley face with one eye covered by an eye patch adorn billboards across Tel Aviv and on major highways.

The app is a key part of the Shellanoo Group, which is funded in part by investments from global celebrities, including music stars Will.I.Am and Nicki Minaj, as well as Russian billionaire and owner of Chelsea football club Roman Abramovich.

The app works like other social networking channels such as Whatsapp, with users able to chat, send pictures and videos. But the identity of the sender remains anonymous.

'A Lot Of Sexual Harassment'

Adam Shafir, a reporter on an Israeli technology television show, said there had already been cases of bullying.

He pointed to similar anonymous apps such as Secret, which was eventually closed down after a campaign against it.

"You have a lot of sexual harassment -- guys send girls remarks about their bodies, about the things they would like to do to them," he said.

"And then there are specific threats, people saying things like 'I will kill you'."

The company say there are sufficient checks and balances, with users able to block people and flag threats. Messages deemed serious enough are passed onto police.

But Israeli parliament member Merav Ben Ari said she was concerned that young people would be bullied and could even commit suicide.

"If you are going to say something nice, you wouldn't send it anonymously," she said.

A survey late last year found that around one in five teenagers has experienced bullying online, with a fifth of those considering suicide.

In Israel last summer, a civil servant committed suicide after a post on Facebook accusing him of racism went viral -- a claim he denied.

Shafir highlighted the case of a couple who were travelling in Europe when they received a message on Blindspot.

"The wife got messages saying her husband is cheating on her," he said. "The man denies he is cheating, but this can destroy marriages."

David Strauss, a spokesman for Blindspot's parent company, admitted they had received around 300 emails from the irate husband.

"But we are just the platform," he said.

On Monday, the technology committee in Israel's parliament met to discuss the app.

Ben Ari said that "during the two hours we didn't hear even one thing that was good about this app".

But Strauss said that anonymity online was "simply an evolution, whether people like it or not".

"Maybe this MP didn't like when people started to use CDs, maybe she really liked cassettes," he said.