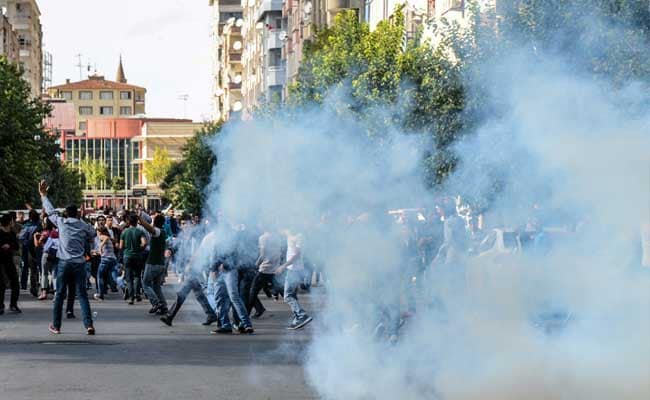 Turkish riot police use tear gas to disperse protesters gathered in Diyarbakir on October 10, 2015, after twin blasts at a peace rally in Ankara. (AFP)

They said there was "strong evidence" that it was also behind other attacks in the country, including one on the border with Syria in July, and was planning more.

"This terrorist organisation carried out the attack on the Ankara train station on the orders of the terrorist group in Syria and sought a suicide bomber of Turkish origin," Ankara prosecutors said in a statement.

A cell in the southeastern province of Gaziantep which borders Syria "planned attacks inside Turkey after taking direct orders from Daesh in Syria," the statement said, using an another acronym for ISIS.

The October 10 attack targeted a peace rally staged by Turkish leftists and pro-Kurdish activists and was the worst ever on Turkish soil, sharply raising tensions ahead of this Sunday's general election.

Turkish officials had said previously the attack was carried out by two suicide bombers, including at least one Turk, and that the ISIS group was the number one suspect.

The prosecutors said information extracted from electronic devices had revealed "crucial information" about the organisation behind the carnage, including the flow of funds to cells in Turkey from its bases in Syria.

Police this week launched raids on suspected IS hideouts in several parts of the country, including an operation in the main Kurdish city of Diyarbakir which resulted in the death of two Turkish policemen and seven terrorists.

Media reports at the weekend said security forces were searching for a cell allegedly plotting a major attack, such as hijacking a plane or a vessel or carrying out suicide attacks in a crowded location.

Pressure has piled on President Recep Tayyip Erdogan, with opposition figures blaming him for security lapses over the Ankara bombing and failing to crack down on ISIS.

One of the Ankara bombers was officially identified last week as Yunus Emre Alagoz, brother of the man suspected of carrying out the attack in Suruc on the Syrian border in July, which left 34 people dead and which prosecutors said was also the work of ISIS.

Four people suspected of playing a role in the Ankara attacks have been detained.