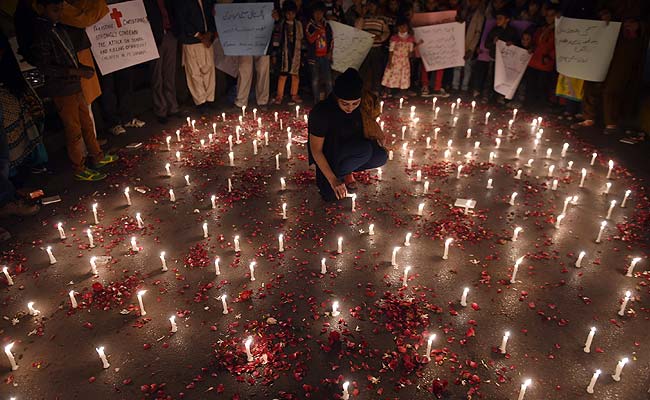 Peshawar: A shocked Pakistan on Wednesday began burying 132 students killed in a grisly attack on their school by Taliban militants that has heaped pressure on the government to do more to tackle the insurgency. (Peshawar School Attack: Track Live Updates)

People across the country lit candles and staged vigils as parents bade final farewells to their children during mass funerals in and around Peshawar, the volatile city on the edge of Pakistan's lawless tribal belt where the school was located.

Grief mixed with anger as people looked to the authorities - long accused of not being tough enough on extremists - to stem spiralling violence in a nation which has become a safe haven for al Qaeda-linked groups. (Mass Funerals in Pakistan and a School Drenched in Blood)

At a vigil in the capital Islamabad, Fatimah Khan, 38, said she was devastated by the atrocity.

"I don't have words for my pain and anger," she said. "They slaughtered those children like animals." (Tragic Stories of Pakistan School Massacre)

Sixteen-year-old Naba Mehdi, who attends the Army School in the nearby garrison city of Rawalpindi, had a message of defiance for the Taliban.

"We're not scared of you," she said. "We will still study and fight for our freedom. This is our war."

In apparent response to public opinion after what may have been the deadliest militant attack in Pakistani history, Prime Minister Nawaz Sharif announced he had lifted a moratorium on the death penalty. (Will Wage War on Terror Till Not a Single Terrorist Left in Pakistan: Nawaz Sharif)

Pakistanis may be used to almost daily attacks on security forces but an outright assault on children stunned the country, prompting commentators to call for a tough military response.

In all, over 160 people were killed in the attack on the military-run Army Public School, according to the army.

The school's sprawling grounds were all but deserted on Wednesday, with a few snipers manning the roofs of its pink brick-and-stone buildings. Army vehicles and soldiers wearing face masks and carrying rifles were deployed by the entrance.

A tour of the school revealed a place shattered by hours of fighting, its floor marked with blood and walls pockmarked with bullet holes. Classrooms were filled with abandoned school bags, mobile phones and broken chairs.

(A shoe lies on the bloodied floor of the school. Photo: Agence France-Presse)

One wall was smashed where a suicide bomber blew himself up, blood splattered across it. His body parts were piled nearby on a white cloth. The air was thick with the smell of explosives and flesh. (Inside the Peshawar School Where Young Children Were Shot)

A day after the attack, Peshawar appeared subdued as people digested the tragedy. More details of the well-organised attack emerged as witnesses came forward with accounts.

"They drove it around the back of the school and set it on fire to block the way. Then they went to Gate 1 and killed a soldier, a gatekeeper and a gardener. Firing began and the first suicide attack took place."

Mr Sharif has announced three days of mourning, but people's anxiety focused on what the authorities can do to protect them.

Mr Sharif came to power last year promising to negotiate peace with the Taliban, but those efforts failed, weakening his position and prompting the army to launch an air-and-ground operation against insurgents along the Afghan border.

The military staged more air strikes there late on Tuesday in response to the school attack, security sources said, but it was unclear what the target was.

(A picture of the six attackers, which was released by the Taliban)

They are allied with the Afghan Taliban as well as al Qaeda and other foreign fighters, and Pakistan has long accused Afghanistan of not doing enough to crack down on their bases.

Afghanistan, for its part, blames Pakistan for allowing militant groups such as the Afghan Taliban and Haqqani Network to operate freely on its territory.

Promoted
Listen to the latest songs, only on JioSaavn.com
Pakistan's Dawn newspaper quoted a source saying the militants were acting on direct orders from their handlers in Afghanistan and that prominent Taliban commander Umar Naray was the ultimate mastermind of the attack. (The Men Who Shot 132 Children at Their School in Pakistan)