Anger After Latest Police Killing of Black Teen in US 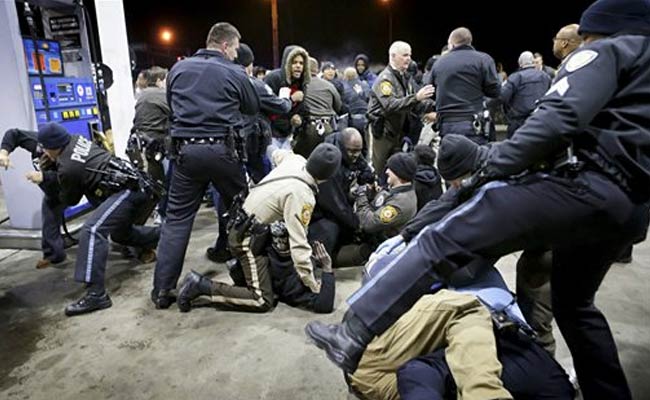 Police try to control a crowd Wednesday, Dec. 24, 2014, on the lot of a gas station following a shooting Tuesday in Berkeley, Missouri. (AP)

Berkeley: Officials scrambled to head off renewed anger on Wednesday after an armed black teenager was shot dead by a white officer in a St Louis suburb, insisting the use of force was justified.

The killing took place late Tuesday at a gas station in Berkeley, near Ferguson, Missouri -- ground zero of a new protest movement over police killing of black suspects -- and triggered immediate protests.

Nationwide protests were sparked after unarmed black teenager Michael Brown was shot dead by a white officer in Ferguson, a mainly African American town with a mostly white police force.

After several weeks, demonstrations gained momentum in reaction to several other killings of black suspects by police, including that of Eric Garner, who died in a chokehold in New York last July.

Separate grand juries is St Louis and New York failed to indict officers in either the Brown and Garner cases, sparking allegations the justice system is weighted against black victims of police abuse.

But officials in Ferguson's neighboring suburb Berkeley said Tuesday's shooting should not be compared to the previous cases, and said the officer was acting in self-defense.

"You couldn't even compare this with Ferguson or the Garner case in New York," Berkeley Mayor Theodore Hoskins said.

He told reporters most city officials and police officers in Berkeley -- a town of 9,000 which is 85 percent black -- are African American.

"Our police officers are more sensitive and it's because of the black and white relationship, it's because they interact, so you get a better understanding, that's why I believe we are different than the city of Ferguson."

He said both St Louis County and local Berkeley police were conducting independent investigations of the incident, which was captured on surveillance video.

St Louis county police chief Jon Belmar said an 18-year-old suspect levelled a gun at an officer responding to a theft complaint, leaving him with no alternative but to shoot.

Belmar said two men approached the officer's car as it arrived at the gas station. One suspect pointed his nine-millimeter pistol at the officer, who drew his own weapon and fired three shots.

"The individual produced a pistol with his arms straight out pointing at the officer across the hood of the police car at that point the policed officer produced his service weapon and fired," he said.

Police are hunting for the second man who fled the scene.

Officials named the suspect as 18-year-old Antonio Martin, who police said was known to police for assault and robbery charges.

St Louis police said the officer -- a 34-year-old white man with six years experience on the force -- was not wearing his body camera.

The camera on the dashboard of his patrol car was also not on.

Missouri's State Senator Maria Chappelle-Nadal lamented the killing of another African American, and said the officer should have been wearing a camera.

"The definition of deadly force in the state of Missouri has yet failed this community again," she told CNN.

But she also criticised the dead teeenager.

"A young man had an illegal gun and pointed it at a police officer and that is certainly not acceptable," she said.

There are three body and dashboard cameras in Berkeley's police force, which is expected to receive more in the coming months, according to the mayor.

A 300-strong crowd gathered after the shooting, with demonstrators lobbing bricks and three explosive devices, which officials said were likely fireworks. Police responded with pepper spray.

A small group was seen looting a shop close to the scene of the shooting. At least one officer was injured and is in hospital after the clashes.

Belmar said "bad choices" were made by the suspect, and defended the officer's actions.

"This individual could have complied with the officer, he could have run away, he could have dropped the gun... it didn't have to end with him approaching the officer with an arm extended and a nine-millimeter pistol in his hand," he said.

"His girlfriend told me that the police was messing with them," Martin said on CNN.

Promoted
Listen to the latest songs, only on JioSaavn.com
"When he was trying to get up and run, they started shooting him. They won't tell me nothing. They won't even let me see my baby."

The recent shootings have inflamed resentment against police tactics in the United States and distrust many blacks feel toward law enforcement.