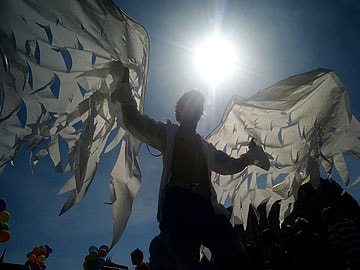 Rome: Angels exist but do not have wings and are more like shards of light, at least according to a top Catholic Church "angelologist" who says the heavenly beings are now back in vogue thanks to New Age religions.

"I think there is a re-discovery of angels in Christianity," Father Renzo Lavatori told AFP on the sidelines of a conference on angels in a lavishly-frescoed Renaissance palace in Rome.

"You do not see angels so much as feel their presence," said Lavatori, adding: "They are a bit like sunlight that refracts on you through a crystal vase."

The clergyman was taking part in a debate on angelic art by the Fondazione Archivio Storico organised in the Vatican-owned Palazzo della Cancelleria.

He said the popularised image of angels is a necessary result of their being "back in fashion" but is dismissive of all the angel art around Christmas.

"There is space for that, but you have to understand that these are not real representations. Angels do not have wings or look like cherubs," he said.

The widely-published Catholic clergyman is also a "demonologist" and says angels are more needed than ever because increasing secularisation and materialism in society have left an "open door" for the devil.

Promoted
Listen to the latest songs, only on JioSaavn.com
"There is a lot more interference from diabolical forces. That is why you see queues of people outside the exorcists' offices in churches," he said.

"Pope Francis talks more about the devil than about angels and I think rightly so. But it's still early, he will get round to the angels too."
Comments
Catholic ChurchRome