Angela Merkel herself was sworn in on November 22, 2005, then taking over from Gerhard Schroeder of the centre-left SPD and putting her conservative CDU-CSU bloc in charge. 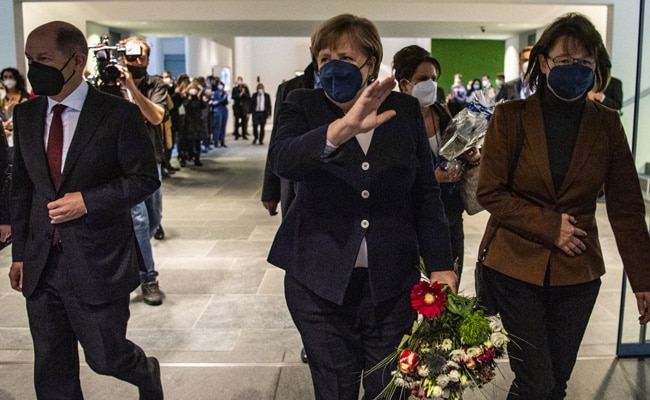 With the same stoicism that had marked Angela Merkel's 16 years in office, the outgoing German chancellor left power behind on Wednesday, looking straight ahead as the Audi car she was in drove out of the chancellery.

"I know you are starting work highly motivated," she had told her successor Olaf Scholz of the Social Democrats just minutes before.

"Take this office and work in the best interest of our country -- that is my wish," she said.

Merkel accompanied key moments of a highly symbolic day when Scholz and his coalition of SPD, Greens and the liberal FDP officially took power.

Dressed in her signature blazer-trouser set, this time in deep blue, she was seated up in the public stands next to former president Joachim Gauck as Scholz was formally elected by parliament.

The Bundestag lower house opened the day with a two-minute standing ovation for her, something that she acknowledged standing and waving.

As she climbed into her car at the end of the ceremony in the chancellery, it was also to applause from her staff, who had gifted her gear including walking sticks for her future hikes.

A handful of people had gathered outside the gates, hoping to catch a glimpse of the veteran leader who was once called the world's most powerful woman.

"She is the angel of the century," said Souleyman from Afghanistan, describing himself as a "big fan".

"I came to see Merkel for a last time," said Enrique Velazco, 30. "She stood for stability for the world, including Europe and Germany. I like her because she is pragmatic, I'm a little sad today."

But Merkel herself did not shed a tear, at least publicly.

And little else betrayed her emotions, something that the mask that she was obliged to wear under coronavirus rules perhaps helped to hide.

Merkel herself was sworn in on November 22, 2005, then taking over from Gerhard Schroeder of the centre-left SPD and putting her conservative CDU-CSU bloc in charge.

This time, the power transfer went the other way, though both sides had so often stressed "continuity" that one could be forgiven for thinking they were from the same political families.

The first chancellor not to seek reelection of her own accord, Merkel walks away from politics after three decades as an MP.

Her popularity remains intact and observers believe the 67-year-old could have won a fifth term had she sought it.

She has offered few clues on what she might do in her retirement, saying only in a trip to Washington this year that "maybe I'll try to read something, then my eyes will start to close because I'm tired, so I'll take a little nap, and then we'll see where I show up".

At a goodbye session with her parliamentary group on Tuesday, Merkel said she would in the future be based from the former office of Margot Honecker -- the wife of East Germany's longtime leader and the communist state's education minister, just steps away from the Brandenburg Gate and the Reichstag.

Several large wooden chess pieces -- including the queen -- that were given to her by the federation of forest owners have already been moved to the new office of Germany's latest 'former chancellor'.

Merkel had told the parliamentary group that she was ready to take questions from the new government but would not offer any advice publicly, participants at the session told AFP.

While not betraying her emotions on Wednesday, she offered a hint of what she had been up against in her four terms, and her verdict on her tenure.

"I know from my own experience that it is a moving moment to be elected to this office," she told Scholz.

"You'd probably have guessed that it is an exciting, fulfilling task, but also a demanding one.

"But if you approach it with joy, it's also perhaps one of the best tasks there is, to be responsible for this country."