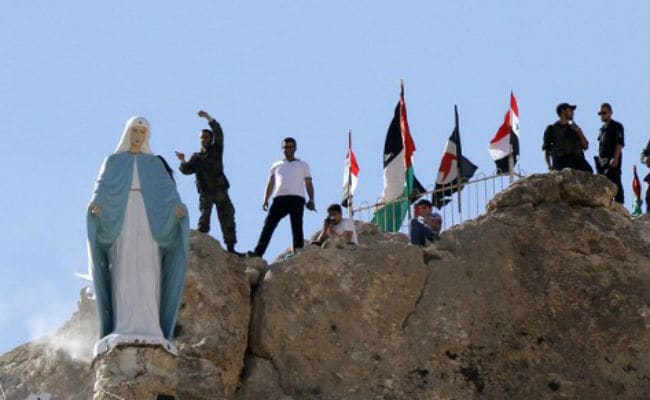 Statue of Virgin Mary perched on the cliffs of the ancient Christian town of Maalula on June 13, 2015 after the statue was restored to its original place. (AFP)

Maalula, Syria: The historic Christian Syrian town of Maalula celebrated Saturday as a new statue of the Virgin Mary was erected in its centre, replacing the figure destroyed in rebel attacks in 2013.

Dozens of families gathered alongside government officials and religious dignitaries in the main square, which was adorned with government flags and a giant portrait of Syrian President Bashar al-Assad.

Located north of Damascus, Maalula is one of the world's oldest Christian settlements, and its inhabitants still speak Aramaic, the language of Jesus.

The fighting damaged the ancient Mar Sarkis monastery and forced the town's 5,000 people to flee their homes and abandon their modest storefronts.

On Saturday, Syrian officials unveiled the new statue of the Virgin Mary, draped in a white robe topped with a blue shawl, her hands lifted in prayer.

"I made the statue as a message of peace for the ancient and unparalleled town of Maalula," said sculptor Buhaij al-Khoury.

The fiberglass figure stood at just over three metres (10 feet) tall and was placed on the base of the original statue.

"The statue was a symbol of protection for me, and when it was gone I felt a huge loss," said Samya, a pharmacist and resident of Maalula.

"Maalula is now back to normal with the return of the statue," the young woman said.
Comments
Virgin Mary StatueChristian Syrian townBashar al-AssadSyrian PresidentAl-QaedaAl-Nusra Front