Donald Trump added that he remains a football fan and said that, while equipment has been improved, "it hasn't solved the problem" 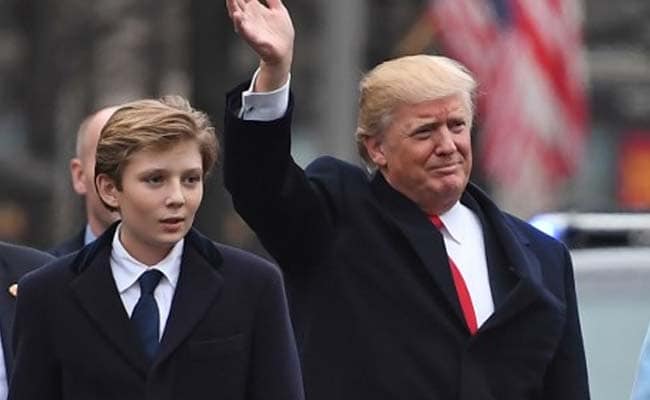 When he was campaigning for president, Donald Trump railed against professional football, telling an audience that the game had become "soft like our country has become soft." On the eve of Super Bowl LIII weekend, he admitted that he wasn't sure he would want his youngest son to play the game because of "the reports that I see coming out having to do with football."

"It's very, it's (a) very tough question. It's a very good question," he told CBS' Margaret Brennan in an interview that was recorded Friday. "If he wanted to? Yes. Would I steer him that way? No, I wouldn't."

Trump added that he remains a football fan and said that, while equipment has been improved, "it hasn't solved the problem," speaking presumably of chronic traumatic encephalopathy and other cognitive issues that players suffer. While the NFL is "a great product," he noted that his son, Barron, who turns 13 next month, is more inclined toward soccer.

"He's liking soccer. And a lot of people, including me, thought soccer would probably never make it in this country, but it really is moving forward rapidly. I, I just don't like the reports that I see coming out having to do with football - I mean, it's a dangerous sport and I think it's ... really tough, I thought the equipment would get better, and it has," he told Brennan. "The helmets have gotten far better but it hasn't solved the problem. So, you know I, I hate to say it because I love to watch football. I think the NFL is a great product, but I really think that as far as my son, well, I've heard NFL players saying they wouldn't let their sons play football. So. It's not totally unique, but I, I would have a hard time with it."
Trump's comments came as part of a "Face the Nation" segment with Brennan that touched on wide-ranging topics, including foreign affairs, administration personnel, Roger Stone and Robert Mueller III's investigation.

Airing on the day of Super Bowl LIII, football was a natural topic, including the president's feelings about NFL players who chose to demonstrate during the national anthem, an issue that rocked the NFL during the 2017 season, and his relationship with Commissioner Roger Goodell. Trump hasn't changed his mind about standing for the national anthem, a controversy he helped stoke by saying players were disrespecting the military and saying he'd suspend or fire any "son of a bitch" who, like Colin Kaepernick, took a knee. Protesting players maintain that they were opposing police brutality and social injustice. NFL owners and players reached agreement on a way in which to convert the activism to action and very few players demonstrated this season. That did not escape Trump's notice. Nor did the rise in NFL ratings during the 2018 season.

"You have to respect our flag and our country. I want that as president and I'd want that as a citizen. And I have a very good relationship. I did them a big favor in negotiating the USMCA, which is basically the replacement to NAFTA, which is one of the worst trade deals ever made," Trump told Brennan. "And I said to Canada, look, we have a great American company known as the NFL, and they were being hurt and treated unfairly, the NFL, by Canada for a long time.

"And I said to Prime Minister Trudeau, who was very nice about it and really understood it, I hope you can settle the difference immediately and fast. And they did. So I did the NFL a big favor, as a great American company and they appreciated it. And Roger Goodell, this is a dispute that has gone on for years. Roger Goodell called me and he thanked me. And I appreciated that. But they haven't been kneeling and they have been respecting the flag and their ratings have been terrific ever since. And a lot of good things happened."

On Saturday, the NFL honored two of the leaders of the players' demonstrations. The Miami Dolphins' Kenny Stills was named his team's Walter Payton Man of the Year and said he'd be donating the $50,000 award to Kaepernick's Know Your Rights Camp, which is, according to the Associated Press, ''a free campaign for youth founded by Kaepernick to raise awareness on higher education, self-empowerment, and instruction to properly interact with law enforcement in various scenarios.'' The Philadelphia Eagles' Chris Long was named the league's Man of the Year for his efforts to improve literacy.

Asked if players "had a point" about kneeling, given that the majority of victims of police violence are black, Trump pointed to the criminal justice reform bill he recently signed.

"And if you look at what I did, criminal judicial reform, and what I've done - President Obama tried. They all tried. Everybody wanted to do it. And I got it done and I've been, you know, really, a lot of people in the NFL have been calling and thanking me for it," he said.

"They have been calling and thanking, you know, that people have been trying to get that taken care of and it's now signed into law and affects tremendous numbers of people, and very good people. I think that when you want to protest I think that's great. But I don't think you do it at the sake of our flag, at the sake of our national anthem. Absolutely."

While he said that he understood the roots of the demonstrations, he remains adamant that protests have a time and a place.

"A lot of it is having to do with reform from what I understand. Whether it's criminal justice or whatever it may be and they have different versions and everybody seemed to have a different version of it. But a lot of it had to do with that, and I took care of that," Trump said. "I think that people have to, at all times, respect our flag and at all times respect our net--, our, our national anthem and our country. And I think there are plenty of places and times you can protest and you can do a lot. But you can't do that. That's my opinion."

As for his comments about his son, those are more moderate than what he said in January 2016, when he also directed his criticism at the number of flags that were being thrown.

"It's a Sunday, who the hell wants to watch these crummy games? I just want to watch the end," he said in a stump speech. "By the way - OK, let me go there for a second. Let me end that story. So we gave them Iraq, we're stupid. We're stupid. I'll change things. Believe me, I'll change things. And again, we're going to be so respected. I don't want to use the word 'feared.' What I just said about a game - so I'm watching a game yesterday. What used to be considered a great tackle, a violent head-on (tackle), a violent - if that was done by Dick Butkus, they'd say he's the greatest player. If that were done by Lawrence Taylor - it was done by Lawrence Taylor and Dick Butkus and Ray Nitschke, right? Ray Nitschke - you used to see these tackles and it was incredible to watch, right?

"Now they tackle. 'Oh, head-on-head collision, 15 yards.' The whole game is all screwed up. You say, 'Wow, what a tackle.' Bing. Flag. Football has become soft. Football has become soft. Now, I'll be criticized for that. They'll say, 'Oh, isn't that terrible.' But football has become soft like our country has become soft. It's true. It's true. The outcome of games has been changed by what used to be phenomenal, phenomenal stuff. Now these are rough guys, these are rough guys. These guys - what they're doing is incredible, but I looked at it and I watched yesterday in particular. So many flags, right? So many flags. And I could imagine a guy like Lawrence Taylor and Dick Butkus, who was really rough, and some of these guys sitting there watching. 'Wow, what a beautiful tackle.' 'Fifteen yards! That's - the game is over.' You can't kick a field goal any more." He wasn't finished.

"It's boring - although I love Tom Brady. I gotta tell you. I do love Tom. He's a great guy. But it's different. But it's become soft and our country has become soft."

(Except for the headline, this story has not been edited by NDTV staff and is published from a syndicated feed.)
Comments
Donald TrumpFootballPrime Minister Justin Trudeau