The Nobel Committee announced in October it was honouring Abiy for his efforts to resolve the long-running conflict with neighbouring foe Eritrea. 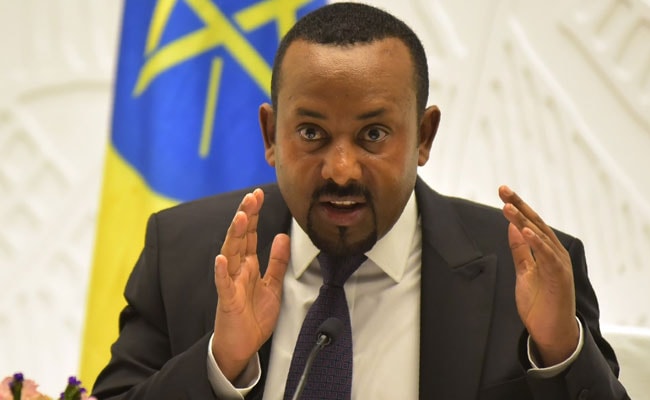 Ethiopian Prime Minister Abiy Ahmed will collect his Nobel Peace Prize in Oslo on Tuesday, but as ethnic violence rises at home he has kept festivities and meetings with the media to a minimum.

Hailed as a modern, reformist leader, Abiy's decision to skip all events with the press has dismayed his Norwegian hosts.

Africa's youngest leader at just 43, he is to receive the prestigious award at a ceremony in Oslo City Hall at 1:00 pm (1200 GMT), attended by the royal family and Norwegian public figures.

The Nobel Committee announced in October it was honouring Abiy for his efforts to resolve the long-running conflict with neighbouring Eritrea.

On July 9, 2018, following a historic meeting in Eritrea's capital Asmara, Abiy and Eritrean President Isaias Afwerki formally ended a 20-year-old stalemate between their countries in the wake of the 1998-2000 border conflict.

That was just three months after Abiy took office.

During the whip-fast rapprochement that followed, embassies reopened, flights resumed and meetings were held across the region.

Abiy's actions sparked optimism on a continent marred by violence, and he went on to play an important mediation role in the Sudan crisis and attempted to revive a fragile peace deal in South Sudan.

In stark contrast to his authoritarian predecessors, the early days of his mandate also saw a wave of democracy-boosting measures in Ethiopia, as he lifted the state of emergency, released dissidents from jail, apologised for state brutality and welcomed home exiled armed groups.

He also established a national reconciliation committee and lifted a ban on some political parties.

Abiy's reforms and visions lifted hopes far beyond his country's borders, but the "Abiymania" hype has faded somewhat and he is now facing major challenges.

His vow to hold the first "free, fair and democratic" elections since 2005 in May could be threatened by ethnic violence.

"The situation in Ethiopia has... new challenges but without challenges there is no way that we can do something new," Abiy told Norwegian broadcaster NRK on his arrival in Oslo.

"We consider those challenges as a great opportunity to do something positive."

Ahead of the elections, experts say the Ethiopian leader may now have to shift his attention away from the peace process.

The regime of Isaias Afwerki, the only president Eritrea has ever known since independence, has given no sign of any kind of political opening.

The land border between the two nations is once again closed, and the question of border demarcations remains unresolved.

Faced with these challenges, Abiy has considerably shortened the traditional Nobel programme: he will only stay in Oslo for a day and a half, compared to more than three days for most laureates.

And perhaps more importantly, the former officer and ex-intelligence chief has chosen to forego any events where the media could ask him questions.

The traditional press conference held by the laureate on the eve of the ceremony has been stricken from the programme, and instead of fielding questions after meeting with Norway's prime minister Abiy will merely make a statement.

Also gone are individual interviews with the media, and a question-and-answer session with youngsters under the aegis of Save The Children.

The head of the Nobel Institute, Olav Njolstad, called the decision "highly problematic".

"It's linked to the situation in his country and his personality: he's religious (Pentecostal) and does not want to put himself in the spotlight," Njolstad told AFP.

"In the eyes of the (Nobel) Committee, a free press and freedom of expression are essential conditions for a lasting peace in a democracy, and so it's strange for a Peace Prize laureate to not want to speak to the press," he added.

Abiy's entourage said it was "quite challenging" for a sitting leader to spend several days at such an event, especially when "domestic issues are pressing and warrant attention".

"(On) a personal level, the humble disposition of the Prime Minister rooted in our cultural context is not in alignment with the very public nature of the Nobel award," his press secretary Billene Seyoum said.

The other Nobel prizes for literature, physics, chemistry, medicine and economics will also be handed over on Tuesday, but in Stockholm.

(Except for the headline, this story has not been edited by NDTV staff and is published from a syndicated feed.)
Comments
EthiopiaAbiy Ahmed AliNobel Peace Prize