Amber Heard Johnny Depp Trial: During his questioning, Mr Depp denied striking Ms Heard and claimed that she was the one who was frequently violent. 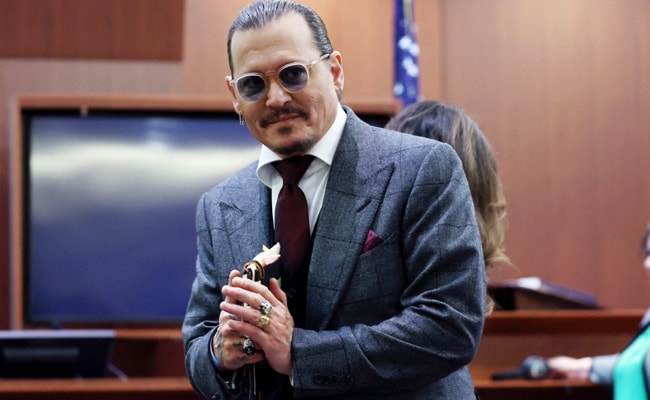 Johnny Depp in court during the defamation trial.

Johnny Depp was seen smiling inside the court which is hearing defamation suits filed by the actor and his ex-wife Amber Heard against each other. The moment occurred when Ms Heard's lawyer did an impression of Mr Depp's voice.

The attorney, Elaine Bredehoft, was asking Ms Heard a question about a tape her ex-husband had spoken on when she mimicked Mr Depp, according to The Independent. The actor then smirked in amusement and the clip had gone viral on Twitter and other social media platforms.

This is the fifth week of trial in the defamation case, which was originally filed by Mr Depp over a 2018 op-ed Ms Heard wrote in The Washington Post about domestic abuse she faced. Though the Aquaman star did not name Mr Depp, the actor said the piece was “catastrophic” for his career.

The case is barreling towards closing arguments on May 27 and Ms heard is being cross-examined currently.

Ms Heard has claimed that Warner Bros studio "removed a bunch out" of her role from the upcoming "Aquaman" sequel in the aftermath of her divorce from Mr Depp.

According to Variety, she said Warner Bros, the banner behind 'Aquaman' franchise, "didn't want to include me" in the film.

On Monday, Ms Heard told the court that she filed for divorce from "monster" Johnny Depp in May 2016 because she feared for her life.

"I had to leave him. I knew I wouldn't survive if I didn't. I was so scared that it was going to end really badly for me," she said.

During his four days on the witness stand, 58-year-old Depp denied ever striking Ms Heard and claimed that she was the one who was frequently violent.

Last year, Mr Depp told The Sunday Times that he was being boycotted by the film industry amid the domestic abuse allegations by his former wife as his latest movie "Minamata" was yet to get a release in the US. "Minamata", on which Mr Depp also served as a producer, eventually released in the US in February 2022, by Samuel Goldwyn Films.