The recent Amazon fires sent a plume of smoke drifting far southeastward across Brazil, darkening the skies over some cities and towns. 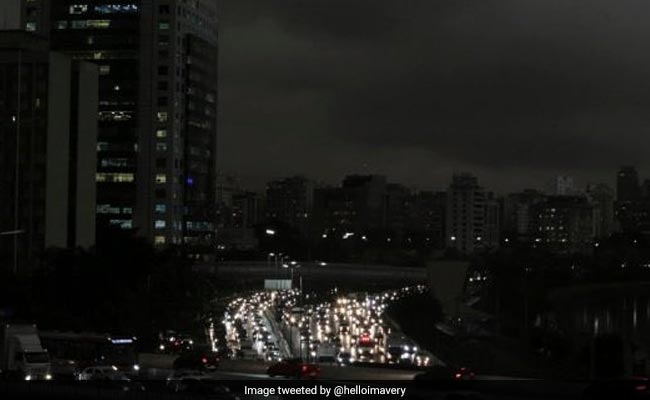 Fire in Amazon Rainforest: Smoke from the widespread fires has turned day into night in Sao Paulo.

Huge tracts of the Amazon, which serves as the lungs of the planet by taking in carbon dioxide, storing it in soils and producing oxygen, are ablaze. Smoke from the widespread fires has turned day into night in Sao Paulo, and intensified a controversy over the Brazilian government's land use policies.

The Brazilian Amazon has experienced 74,155 fires since January, according to data from Brazil's National Institute for Space Research, known by the acronym INPE. That's an 85 percent increase from last year and significantly higher than the 67,790 blazes since by this point in the year during 2016, when there were severe drought conditions in the region associated with a strong El Nino event.

"There is nothing abnormal about the climate this year or the rainfall in the Amazon region, which is just a little below average," INPE researcher Alberto Setzer told Reuters. Speaking of the fires, he said, "The dry season creates the favorable conditions for the use and spread of fire, but starting a fire is the work of humans, either deliberately or by accident."

The fires have covered Sao Paulo in dark smoke, and they are raising concerns that the rainforest, which is one of the most biologically diverse regions on Earth, may be suffering from land-clearing operations and other activities intended to transform the land for agricultural use.

"People stored black water from the rainfall after the massive smoke cloud reached Sao Paulo," says Vitor Gomes, an environmental scientist at the Federal University of Para in Brazil, via email.

According to the European Union's Copernicus Climate Change Service, the fires have led to a clear spike in carbon monoxide emissions as well as planet-warming carbon dioxide emissions, posing a threat to human health and aggravating global warming.

INPE tracks deforestation in Brazil, and its data has shown a huge increase in the Amazon this year. In early August, INPE found that 1,330 square miles of rainforest had been lost since January, which is a rate 40 percent higher than in 2018.

The release of those statistics and ensuing media coverage earned the ire of Brazilian President Jair Bolsonaro. Bolsonaro, who favors increased agricultural and mining development in the Amazon, called those numbers "a lie" and then fired Ricardo Galvao, a physicist who served as the director of the scientific agency. 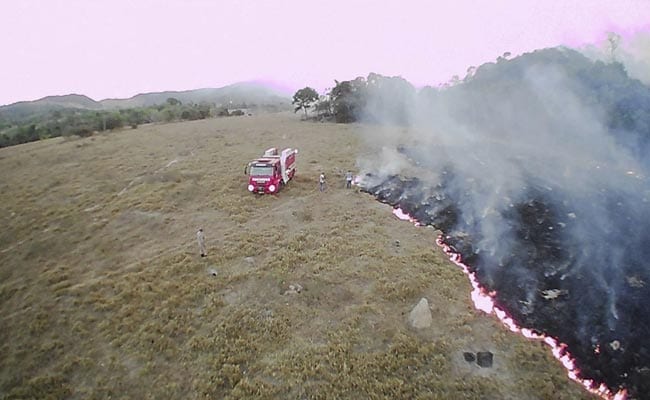 The recent Amazon fires have been widespread, and some came on suddenly. In the state of Para, a wildfire surge occurred last week that was linked to a call by farmers for a "day of fire" on Aug. 10, according to local news reports. INPE, using satellite-based sensors and other instruments to locate fires and track the amount of acreage burned, recorded hundreds of fires in the state as farmers cleared land for agriculture and also burned intact areas of rainforest for further development. Cleared rainforests in this region are typically used for farming cattle and growing soybeans, and much of the land-clearing is done illegally.

The fires there and in other states sent a plume of smoke drifting far southeastward across Brazil, darkening the skies over some cities and towns.

One contributing factor to the spate of fires in the Amazon is the fact that it is the dry season there, the time of year when wildfires tend to break out from human activities. The dryness acts to make the environment particularly receptive to fires, but most of the blazes are started by people, either intentionally or by accident.

"The dry season certainly adds to fires, but we had more intense dry seasons in the past . . . and never experienced such big fires," Gomes said.

In addition, this is not yet the peak of the fire season in Brazil, according to Mikaela Weisse, a program manager with Global Forest Watch, who closely tracks fire and deforestation trends through satellite imagery. Weisse said most of the fires are taking place on cleared agricultural land, but satellites may be missing flames burning beneath tree canopies.

The fire season in Brazil peaks between August and October, Weiss said, and so far this year is tracking close to 2016's wildfire and tree cover losses. "It's early in the season, so what happens in the next couple of months is crucial for determining how significant this is." 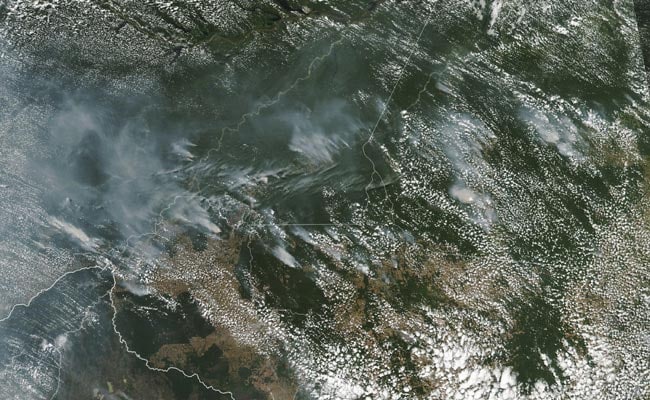 An increase in fires and ensuing deforestation in the Amazon make it even more difficult, if not impossible, for countries to hold global warming to "well below" 3.6 degrees (2 degrees Celsius) compared with preindustrial levels, as called for in the Paris climate agreement.

The Amazon, which spans 2.12 million square miles, sucks up about a quarter of the 2.4 billion metric tons of carbon that global forests absorb each year. However, the ability of the rainforest to pull in more carbon than it releases is diminishing, weakened by changing weather patterns, deforestation and increasing tree mortality, among other factors. The ongoing fires will further degrade its function as a carbon sink.

If the Amazon were to turn into a consistent net source of carbon emissions, it would accelerate global warming while also leading to a huge loss in species that are not found anywhere else on Earth.

A study Gomes co-authored this year found that while deforestation is the main threat to Amazonian tree species, climate change may exceed it within a few decades. The research found that a combination of climate-change-related effects, such as increased dryness, along with deforestation to make way for agriculture, could cause a decline in Amazon tree species richness of nearly 60 percent.

In a worst-case scenario, without any effective climate policies or programs to limit deforestation, the study found that by 2050, the Amazonian lowland rainforest could become fragmented, harming biodiversity and making the Amazonian ecosystems far less capable of soaking in and storing carbon. The study warned of a "tipping point" beyond which the forest cannot recover.

"According to the results of our studies, even in the 'best-case' scenario (optimistic), half of Amazonian tree species will be threatened in the future. The trends we've seen today could be beyond our 'worst-case' scenario," Gomes said.