Amal Clooney became the third lawyer to part ways with Prime Minister Boris Johnson's government, after it introduced legislation that would rewrite its post-Brexit obligations to the European Union over Northern Ireland. 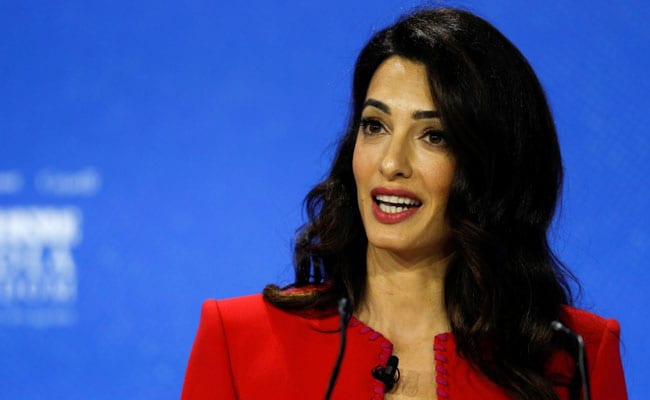 Amal Clooney on Friday resigned her post as a UK envoy for media freedom.

Prominent human rights lawyer Amal Clooney on Friday resigned her post as a UK envoy for media freedom, in protest at the government's "lamentable" decision to breach its EU divorce treaty.

Clooney became the third lawyer to part ways with Prime Minister Boris Johnson's government, after it introduced legislation that would rewrite its post-Brexit obligations to the European Union over Northern Ireland.

Undermining the rule of law "threatens to embolden autocratic regimes that violate international law with devastating consequences all over the world", she wrote in a letter to Foreign Secretary Dominic Raab and seen by AFP.

"Although the government has suggested that the violation of international law would be 'specific and limited', it is lamentable for the UK to be speaking of its intention to violate an international treaty signed by the prime minister less than a year ago."

On her appointment to the UK role in April 2019, Clooney had said she welcomed the opportunity to build on her legal defence of persecuted journalists by working with the government to champion a free press around the world.

"I accepted the role because I believe in the importance of the cause, and appreciate the significant role that the UK has played and can continue to play in promoting the international legal order," she wrote.

"However, very sadly, it has now become untenable for me, as special envoy, to urge other states to respect and enforce international obligations while the UK declares that it does not intend to do so itself."

While conceding the UK internal market bill violates the EU Withdrawal Agreement, the government argues it is needed to protect the country's territorial integrity in case the EU seeks to unfairly impede trade with Northern Ireland.

The argument has failed to persuade two other jurists who have quit their government roles recently including its most senior law officer for Scotland, Richard Keen.

He said in his resignation letter to Johnson he had "found it increasingly difficult to reconcile what I consider to be my obligations as a law officer with your policy intentions with respect to the UKIM bill".

After quelling one backbench revolt over the legislation and under pressure to make its intent clearer, the government on Thursday issued a document spelling out various scenarios in which the bill's provisions would be executed.

But in an apparent olive branch to Brussels, the document said the government would also seek to resolve post-Brexit disputes with the EU in "appropriate formal dispute settlement mechanisms", not unilaterally.

The document was released as the chief negotiators for EU-UK trade talks met in Brussels, to try again to avoid a potentially ruinous breakdown when a post-Brexit transition period expires at the end of this year.