All The Presidents Recited A Core Prayer At Bush Funeral. Except Trump

Video from the funeral of H.W. Bush showed a front row of presidents at the Washington National Cathedral, standing and reciting it along with the program. 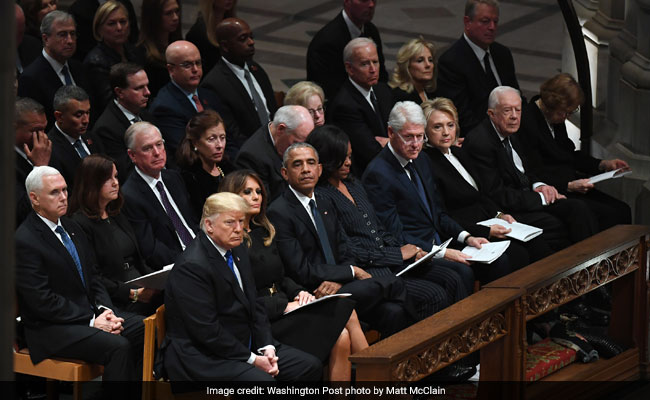 President Donald Trump stood with his hands folded in front of him during the program.

The Apostles' Creed is one of the prayers most core to Christianity. It states in a few lines the basic narrative of Jesus' life, is the statement of faith in one God, and is said daily by Christians across the globe.

On Wednesday, one Christian didn't say it. And Twitter noticed.

Video from the funeral of former President George H.W. Bush showed a front row of presidents at the Washington National Cathedral, standing and reciting it along with the program, as the voice of Episcopal Bishop Michael Curry boomed through the speakers to the thousands of mourners. Jimmy Carter, Bill Clinton, Barack Obama and their wives glanced up and down from the programs they held in front of them and spoke the prayer, along with everyone else visible in the video. The program, as is typical, calls for the prayer to be said in unison.

President Donald Trump stood, with his hands folded in front of him, waist-high, the program in his left hand, his lips not moving. Melania Trump also did not speak, nor did she hold a program.

Social media, left to right, pounced. The faith and values of Trump have been a source of debate, division, anger and mystery since his run for the presidency began - and especially since many religious conservatives embraced him, despite what critics say is his dishonesty, philandering, crudeness and policies many see as anti-Christian.

Theories (primarily of the snarky variety) poured forth on Twitter.

But mixed in within disgust was a small voice raising a controversial question: Maybe Trump doesn't believe the Creed, and therefore shouldn't say it? This was quickly answered by others noting that Trump says he is a Christian, often praises faith in God and characterizes himself as a friend of the faithful.

The Creed came about two-thirds through the service, shortly after the homily.

Most Christians (or those who have been to church, especially a baptism or funeral) have heard the Apostles' Creed. There are varying translations, but its few lines include something like: "I believe in God, the Father almighty, creator of heaven and earth. I believe in Jesus Christ, his only Son, our Lord. . . . I believe in the Holy Spirit, the holy catholic Church, the communion of saints, the forgiveness of sins, the resurrection of the body, and the life everlasting. Amen."

That is the version used by the Episcopal Church, of which Bush was a member. The funeral was held at Washington National Cathedral. The Cathedral is the seat of the Episcopal Church's presiding bishop, or the closest thing the denomination has to a national church. However it was founded as a place for national spiritual events, and hosts everything from presidential funerals to interfaith and secular events.

The Creed comes from Christianity's earliest centuries, and is an affirmation of faith, said Ruth Meyers, a professor of liturgics at Church Divinity School of the Pacific in Berkeley, Calif. In the Episcopal Church, among other Protestant communities, it is used in daily prayer, as well as in baptisms and burials. It is also a core prayer of Catholicism. It's not a core part of all Christian services, including some evangelical groups, Meyers said.

The Billy Graham Evangelistic Association calls it "the basis" of other creeds, or faith statements. "It is not Scripture, but it is a simple list of the great doctrines of the faith."

"It is as bedrock doctrine as you can get," she said.

It is said by Presbyterians. Trump has said he attended a Presbyterian church growing up and has identified himself in recent years with the denomination. He does not appear to belong to or attend any church regularly since becoming president, though he has worshipped at St. John's Episcopal, across from the White House, several times.

That said, there is nothing in scripture that says you must state the Creed. And it's clear that Christians hold a vast range of views about lines within it, such as whether they take as literal that Jesus was born of a virgin, or was resurrected from the dead, as well as what it means to say God is "creator of heaven and earth."

While many saw the Trumps' silence during the Bush funeral prayer as disrespectful, a symbol of his instinct to hit back on critics, including the Bush family - perhaps even at a funeral - there was also a small current who saw themselves at church, sometimes zoning out.

Whether any of these ideas are relevant to the Trumps' motivation was not immediately clear.

"I think it is normal for a lot of people to choose what they say or don't say in church," Meyers said. "I can't presume to guess why President Trump chose not to say the Creed in this context. I can't speak for him."