Algeria joins a string of countries to be hit by major blazes in recent weeks, including Greece, Turkey, Cyprus and the western United States. 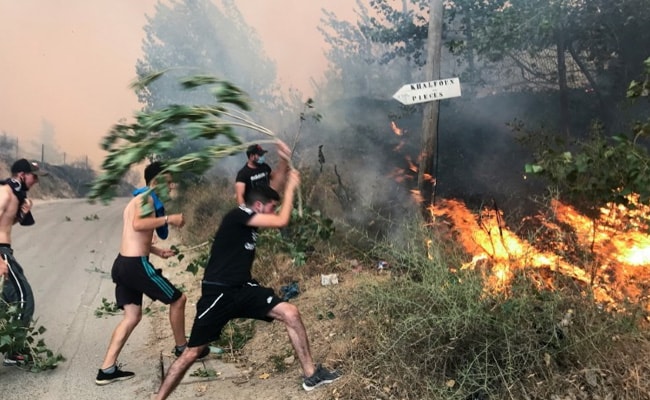 Wildfires fanned by blistering temperatures and tinder-dry conditions have killed at least 42 people in Algeria, authorities said on Tuesday, adding that the fires had criminal origins.

Photographs posted on social media show huge walls of flame and billowing clouds of smoke towering over charred trees in the forested hills of the Kabylie region, east of the capital Algiers.

Algeria joins a string of countries to be hit by major blazes in recent weeks, including Greece, Turkey, Cyprus and the western United States.

President Abdelmadjid Tebboune tweeted his condolences for 25 soldiers killed as they worked to rescue people in the areas of Bejaiea and Tizi Ouzou, the epicentre of the blazes.

"It is with great sadness that I have learned of the martyrdom of 25 soldiers after they were successful in rescuing around 100 citizens from the flames in the mountains of Bejaiea and Tizi Ouzou," the president said.

The defence ministry said the actions of the soldiers had "saved 110 people -- men, women and children -- from the flames".

At least another 14 soldiers were injured to varying degrees.

State radio said three "arsonists" had been arrested in the northern district of Medea and another in Annaba, in relation to other fires.

More than 70 fires have broken out in 18 states across the north of the country, including 10 around Tizi Ouzou, one of the most populous cities in Kabylie.

An AFP photographer in Tizi Ouzou saw medics carrying away bodies of people killed in the fire.

Meteorologists said the temperature would hit 46 degrees Celsius (115 degrees Fahrenheit) on Tuesday in a North African country that is also struggling with severe water shortages.

Interior Minister Kamel Beldjoud, on a visit to Tizi Ouzou, told television that "50 fires starting at the same time is impossible. These fires are of criminal origin."

Arson has been blamed for several major fires in recent years in Algeria.

Last month, President Tebboune ordered a bill to stiffen punishments for starting a forest fire, with sentences of up to 30 years in prison -- and possible life imprisonment, if the fire results in death.

In July, three people were arrested on suspicion of starting fires that devastated 15 square kilometres (six square miles) of forest in the Aures mountains.

In 2020, nearly 440 square kilometres (170 square miles) of forest were destroyed by fire, and several people were arrested on suspicion of arson.

On Monday, the UN released a major report showing how the threat from global warming is even more acute than previously thought.

It highlighted how scientists are quantifying the extent to which human-induced warming increases the intensity and/or likelihood of a specific extreme weather event, such as a heatwave or a wildfire.