"Dig Into Your Past": Ocasio-Cortez To Mark Zuckerberg On Political Ads

"We need to kind to dig into your past behavior and Facebook's behavior with respect to our democracy," Alexandria Ocasio-Cortez said. 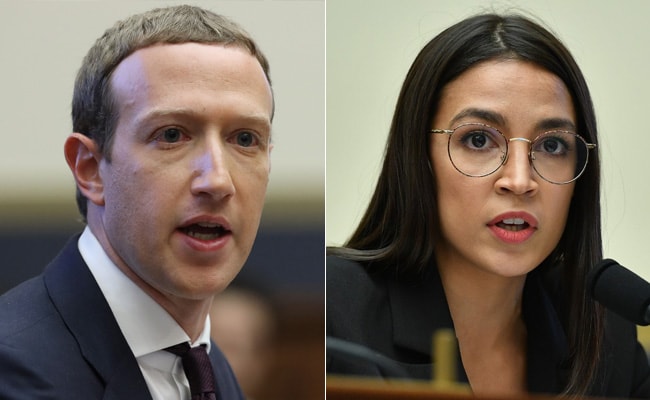 Facebook chief executive Mark Zuckerberg opened the door Wednesday to scaling back plans for the company's digital coin Libra if it cannot win approval as a new currency for global exchanges.

Zuckerberg made the comments as he faced a torrent of criticism on Capitol Hill over the cryptocurrency Facebook is seeking to roll out next year.

"We clearly have not locked down exactly how this is going to work yet," Zuckerberg told members of the House Financial Service Committee.

"The goal of Libra is to build a global payment system rather than a currency."

He acknowledged that Libra could be limited to digital payment systems using individual currencies -- a less ambitious plan than creating a new coin linked to a basket of major currencies.

"I personally am much more focused on being able to help innovate and build a global payment system than I am in any specific makeup of what a currency or reserve might look like," he said.

Libra is backed by an alliance of companies in a nonprofit, Swiss-based association, but some lawmakers are skeptical about the project, and want Facebook instead to focus on data privacy.

Zuckerberg repeated his pledge that the digital coin would not launch without full regulatory approvals and added that Facebook would quit the alliance if it launches prematurely.

Asked whether Libra could simply be linked to the US dollar, Zuckerberg said "the community is fairly split on this point."

He said that it could be far simpler from a regulatory perspective but that "it may be less welcome in other places if it's only 100 percent based on the dollar."

Lawmakers did not hold back in their harsh criticism of Facebook's data practices and doubts about Libra in particular.

"It would be beneficial for all if Facebook concentrates on addressing its many existing deficiencies and failures before proceeding any further on the Libra project," Representative Maxine Waters, who chairs the panel, said at the opening.

On Twitter, Waters ramped up her criticism of Facebook and pledged to block the digital currency plan.

"No one is above the law including Mark Zuckerberg," Waters tweeted.

"Facebook has allowed election interference, released private data, violated civil rights laws, among other offenses & now they're trying to launch a #BigTechTakeover by creating this mysterious #ZuckBuck? Not on my watch!"

Several other lawmakers also took the occasion to question the trustworthiness of the world's largest social network.

"In order to make a decision about Libra, we need to kind to dig into your past behavior and Facebook's behavior with respect to our democracy," said Representative Alexandria Ocasio-Cortez, who peppered Zuckerberg with questions about the Cambridge Analytica scandal and Facebook's decision not to fact-check political ads.

Republican Representative Patrick McHenry offered a more sympathetic view, suggesting the Libra plan should be given the benefit of the doubt given that similar plans are being made in China and elsewhere.

"I have my qualms about Facebook and Libra ... but if history has taught us anything, it's better to be on the side of American innovation," McHenry said.

In his prepared remarks, Zuckerberg argued that the digital currency plan could help "extend America's financial leadership" and promote democratic values as other digital currencies emerge.

During questioning, Zuckerberg noted that a major competitive threat is coming from a Chinese public-private partnership and warned of risks if such a system became the global standard.

If that happens, he said, "it would be very difficult if not impossible for us to impose our sanctions or the kinds of protections" US policymakers would like to see.

Zuckerberg was also grilled by several lawmakers on why the Libra Association is based in Switzerland rather than the United States.

He said Switzerland is important for the global financial system but added: "This is still going to be an American innovation."

Republican Representative Lance Gooden countered that Zuckerberg had "enough influence to bring this home" and said the plan might be better received if the association were based in the US.

Regulators and officials on both sides of the Atlantic have criticized the Libra plan.

The G7 said last week it should not launch "until the legal, regulatory and oversight challenges and risks are adequately addressed."

US Treasury Secretary Steven Mnuchin said Tuesday a Libra launch would be "premature," raising the need to address issues such as protection against money laundering and other illicit activity.