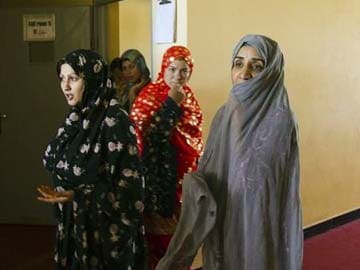 Afghan female prisoners stand in a corridor of a prison in Herat, western Afghanistan.

Herat, Afghanistan: After Farida's husband sold their three-year-old daughter to support his drug habit of several years, she took a knife and stabbed him to death in their house in the western Afghan province of Herat.

The young mother of three then dragged his body into the street and called the police. Farida is now serving a 20-year sentence in Herat's prison for women.

"I do not agree with the sentence," she said, her gaze steady from beneath a green headscarf. "They didn't consider the bad situation I was in."

Farida, 31, expected the police to kill her rather than send her to prison where the first four years of her term have been relatively comfortable. Foreign aid donors have ensured regular meals, heating and healthcare.

But those arrangements are now at risk and fears that women like Farida may be abandoned are growing as the prison's main benefactor, the Italian Provincial Reconstruction Team, winds down operations alongside most foreign troops.

The government has shown little interest in protecting hard-won rights for women and most of its limited funds will be devoted to fighting a growing Taliban insurgency.

"If the government doesn't feed them they don't eat," said Heather Barr, a researcher for Human Rights Watch.

"The government has an important role after the provincial reconstruction team leaves and it's hard to imagine they will have the will, or the ability, to continue maintaining the conditions in prisons as outside funding declines."

With 169 inmates, the Heart jail is Afghanistan's second-largest prison for women after a jail in the capital, Kabul, that holds around 230.

The prison also offers training in English and computer classes, skills that inmates jailed for fleeing abusive or forced marriages might never otherwise have acquired.

The best hope for women in Afghanistan was for foreign aid donors to tie cash to progress, said Suraya Pakzad, who runs women's shelters in several provinces.

"The budget allocated for women's activities is nothing," said Pakzad. "The year 2014 - everybody is talking about that. It creates fear among women in the community."

She attributed the fear to the fact that many Afghans' age-old attitudes towards women have not changed. The judicial process invariably punishes women, whatever their defence.

Farida, for example, said she killed her husband in reaction to years of beatings and watching him drain the family's funds to feed his drug habit.

Many fellow inmates said they had fled abuse and been accused of "zina", or sex between unmarried people, by angry husbands or family. Upon arrest, they faced intrusive virginity tests and imprisonment for attempted adultery even if the test results were negative, Pakzad said.

Rape victims are also routinely jailed for "zina" and left to give birth in prison. Ten babies were born at Herat's jail this year and more than 70 are growing up behind bars.

Concern about a future without foreign support is all the more acute now that the United States has threatened to pull out all its troops over a crucial security deal Afghan President Hamid Karzai has refused to sign.

"We still hope for more aid," said Herat prison chief Sima Pazhman, who has worked there for more than 25 years, including during the harsh days of the Taliban regime.

But if the United States pulls out, others are expected to follow, along with the bulk of foreign aid.

Promoted
Listen to the latest songs, only on JioSaavn.com
Pazhman didn't ask herself whether the women belonged in jail in the first place.

"I don't question the courts," she said. "I see the sentences as though the crimes had really been committed."
© Thomson Reuters 2013
Comments
Afghanistanwomen prisoners