Birmingham Airport, serving the country's second biggest city, suspended flights for all of Sunday morning, as staff worked to clear the runway amid heavy snow. 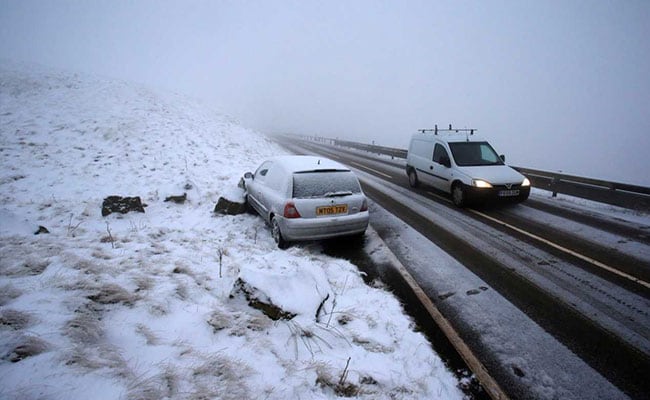 Birmingham Airport, serving the country's second biggest city, suspended flights for all of Sunday morning, as staff worked to clear the runway amid heavy snow.

A spokeswoman told AFP they expected it to reopen early afternoon.

The airport, which typically handles around 30,000 passengers and 200 flights a day in December, diverted 11 flights elsewhere and expected to cancel more than that, she added.

Meanwhile, London Luton Airport closed its runway for two hours before reopening around 1130 GMT to departing aircraft, according to a spokesman.

It had opened to incoming flights by early afternoon.

"All flights (are) subject to delay or cancellation," he said.

Delayed passengers took to Twitter to complain, with one frustrated traveller describing the airport as "like a war zone".

Police forces in worst-hit Wales and central England urged motorists not to travel unless "absolutely necessary" as they dealt with surging calls.

A spokesman for the Highways England agency said there had been road incidents "all over the place".

The flurries continued to fall into the afternoon, raising the prospect of roads becoming impassable.

Swathes of Britain were hit by the snowfall Sunday, with significant accumulation in central and western regions, according to the Met Office, the country's official weather service.

Sennybridge, in Brecon Beacons National Park in Wales, topped the records with 30 cms, while Coleshill, close to Birmingham, received 10 cms, it reported.

Meanwhile, light snow and sleet fell through the morning in London, leaving Northolt, on the outskirts of the capital, with a covering of 2 cms, the Met Office said.

"We've gone through the worst of it," said Oli Claydon, a spokesman, early afternoon.

Most areas impacted would have a "bright, sunny start to Monday," he added.

Promoted
Listen to the latest songs, only on JioSaavn.com
Claydon said the last time Britain saw this much heavy snow nationwide was March, 2013, and during the winter of 2010.