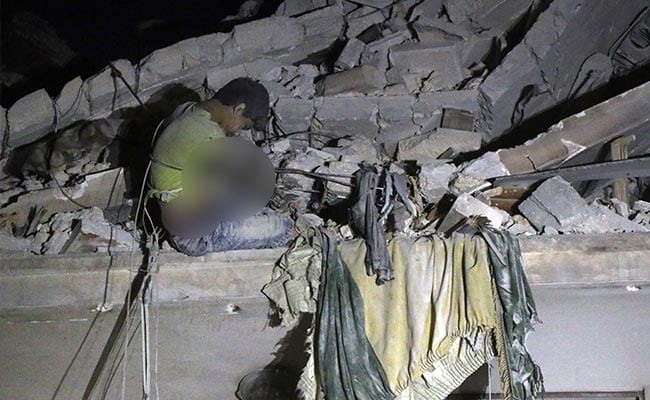 A young Syrian boy waits to be rescued from the rubble of the building. (AFP Photo)

Beirut, Lebanon: Air strikes killed at least 12 civilians in Syria's Aleppo on Monday, a monitor said, bringing to 45 the number killed in 24 hours of bombardment on the battleground city.

The Britain-based Syrian Observatory for Human Rights said five children were among the dead on Monday in the rebel-held district of Marjeh in east Aleppo.

Dozens more people were wounded or still trapped under rubble.

An AFP correspondent in the eastern districts said White Helmets rescuers were still working Monday morning to pull about 20 people out of the rubble in Qaterji.

One civil defence volunteer said they had been unable to complete rescue missions overnight in fear of further air strikes by warplanes circling above.

Both Russian and Syrian warplanes are carrying out air strikes over Aleppo in support of a major offensive by regime forces to capture rebel-held parts of the northern city.

The Observatory -- which relies on a network of sources inside Syria for its information -- says it determines what planes carried out raids according to their type, location, flight patterns and the munitions involved.

How An Energy Expert Triggered Vladimir Putin With One Word