Nikki Haley asked to meet the African ambassadors at the United Nations after they released a joint statement on Friday demanding an apology from Trump for his "outrageous, racist and xenophobic remarks." 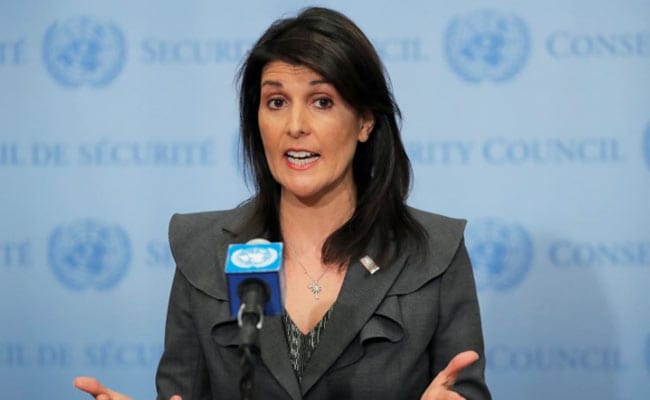 United Nations: US Ambassador Nikki Haley expressed regret on Thursday to African ambassadors who were outraged by President Donald Trump's alleged description of African countries as "shithole" nations, the head of the African Group said.

Haley asked to meet the African ambassadors at the United Nations after they released a joint statement on Friday demanding an apology from Trump for his "outrageous, racist and xenophobic remarks."

Ambassador Anatolio Ndong Mba of Equatorial Guinea, who chairs the Africa Group, said the US ambassador did not offer an apology during the closed-door meeting, but she did express regret.

Haley told the meeting that "she was not there at the White House, she is not sure what was said, but she regretted all this situation that has been created," the ambassador said.

The US mission declined to say whether Haley had addressed the furor over Trump's remarks allegedly made a week ago at a White House meeting with lawmakers on immigration reform.

Ndong Mba said the Africa Group "made a recommendation" to Haley to defuse tensions, which she promised to pass on to Trump.

Diplomats, who declined to be named, said they had suggested that Trump send a friendly message to African leaders at their upcoming summit in Addis Ababa as a gesture of goodwill.

"We appreciate the fact that she came and she talked about all the cooperation between the United States with Africa," said Ndong Mba, who described the meeting as "very friendly."

The US mission posted photos of the meeting on Twitter and said: "Thank you to the Africa Group for meeting today."

"We discussed our long relationship and history of combatting HIV, fighting terrorism, and committing to peace throughout the region," it said in the post retweeted by Haley.

Trump's remarks were condemned by the 55-nation African Union while some African governments summoned the US ambassador in their capitals to demand an explanation.

Trump reportedly demanded to know why the United States should accept immigrants from "shithole countries," after lawmakers raised the issue of protections for immigrants from African nations, Haiti and El Salvador.

However he later tweeted: "this was not the language used."

Earlier this week, 78 former US ambassadors to Africa wrote a letter to Trump expressing "deep concern" over his comments and urging him to "reassess" his views on Africa.

The United Nations slammed the reported remarks as "shocking and shameful" as well as "racist."

Promoted
Listen to the latest songs, only on JioSaavn.com
"You cannot dismiss entire countries and continents as 'shitholes' whose entire populations, who are not white, are therefore not welcome," Rupert Colville, spokesman for the UN human rights office, told reporters in Geneva.