Around the world, diplomats have different traditions for describing the flaws and features of foreign governments. 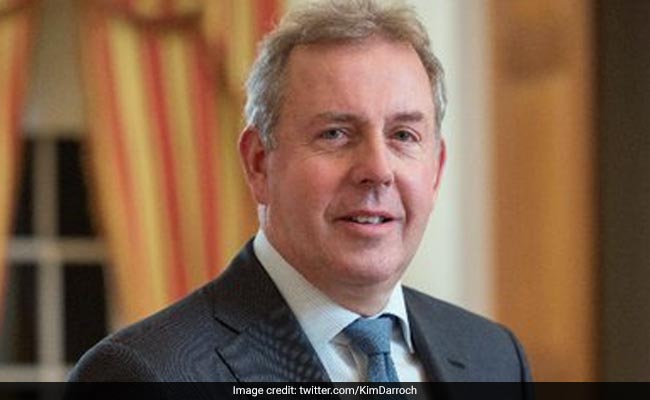 Kim Darroch said on Wednesday he was resigning after drawing Donald Trump's ire.

The lightning-fast resignation of Britain's ambassador to the United States on Wednesday after a leak of his correspondence criticizing the Trump administration has sent shivers down the spines of foreign diplomats in Washington who are paid to send frank assessments to their home countries.

In leaked diplomatic cables, British Ambassador Kim Darroch described the Trump administration as "inept" and "dysfunctional," prompting tweets from President Donald Trump in which he called the ambassador a "pompous fool" with whom the United States would no longer work.

Darroch's resignation has already prompted discussions in embassies about scaling back access to diplomatic cables and moderating the tone of assessments about the Trump administration's handling of global and domestic affairs. Powerful colleagues and friends of Darroch have also sought to keep their expressions of solidarity for the envoy private to avoid angering the U.S. president, though many admitted to sending similarly disparaging cables to their own capitals.

"I think we're all shocked, frankly, by what happened to Kim," said one European diplomat, who like others spoke on the condition of anonymity to avoid angering Trump. "It shows we have to remain careful in how we explain things to our capitals and how we share information within our own system. I know I've sent cables of a similar nature."

In Washington, foreign diplomats are tasked with keeping a polite and respectful exterior while passing along classified cables that reveal a candid, worts-and-all view of the U.S. government. Senior British officials have said that job has become much harder in the aftermath of Darroch's resignation.

"The basis on which we have worked all our careers suddenly feels as if it is challenged," Simon McDonald, the head of the British diplomatic service, told Britain's Foreign Affairs Select Committee on Wednesday. "There is a need for reassurance and reflection."

"You were simply doing your job," McDonald told Darroch in response to his resignation letter.

In his exit note, Darroch said "the current situation is making it impossible for me to carry out my role as I would like."

Around the world, diplomats have different traditions for describing the flaws and features of foreign governments. One Asian diplomat, for instance, noted that Darroch's dramatic prose, describing an American president whose career could end in "disgrace and downfall," would not fly in his country.

A Latin American diplomat offered a similar view. "I'm a little old-fashioned. I would not employ such language," he said. "What we normally do - at least we used to - is to take the opinions you read in the news, the people you talk to . . . and say, 'look, opinion makers in Washington reflect' whatever it is you want to say. . . . But you never so directly put it in your own words. That was a little too strong for me."

In Europe, especially Britain, a more frank style is encouraged.

"There's a rich history of British ambassadors writing brilliant evocative cables, and an end-of-tour message which is totally personal," said Ron Neumann, president of the American Academy of Diplomacy. "This is completely in keeping with British diplomatic tradition."

The island nation that reared William Shakespeare does not, however, have a monopoly on stinging diplomatic prose and other diplomats expressed a desire to curtail access to sensitive cables for fear of future leaks.

"We tend to give access to people who shouldn't have access and measures should be taken," another European diplomat said.

"There's absolutely a nervousness now about how frank we can be in our reporting to our home countries," another diplomat said.

Jeff Rathke, a former U.S. diplomat, said diplomats always weigh the risks of sharing too candid a view, and while Darroch's departure may alter that calculus, the additional caution won't last forever.

"If I were a diplomat working in Washington today, I would certainly be careful about expressing things in my own voice," he said. "It's much easier to attribute to others to say what you think and quote them. But I don't think that's going to stop diplomats here from telling their capitals what is going on."

Darroch's departure has created an awkward situation for Trump loyalists who spent considerable time with him during briefings, phone calls and the British Embassy's numerous and well-reviewed parties.

Republican Sen. Lindsey Graham, R-S.C., for instance, publicly lamented Darroch's departure but chose to blame the news media rather than the person who leaked the secret cables or the president, who publicly pilloried Darroch.

"Kim Darroch did an outstanding job as Ambassador and sorry to see he has resigned his post," Graham tweeted. "He got a raw deal from press."

Former Trump official Sebastian Gorka went another route, bashing Darroch as someone who said "dumb lies about @realdonaldtrump in a cable." Gorka repeatedly accepted invitations from the ambassador to parties and other embassy functions.

After the cables were published in the Daily Mail British tabloid, the White House promptly disinvited Darroch to a White House dinner Monday. In his tweets, Trump called Darroch "wacky" and a "very stupid guy," remarks that diplomats said proved Darroch's point that Trump was completely unfiltered.

"He had access, he was in regular touch with the administration," another European diplomat in Washington said. "What he reported, was it wrong? I don't think so. I'm not going to quote from our reports home, but there may be some similarities."

The United States experienced its own high-profile incident of sensitive leaks becoming public with the 2010 WikiLeaks release of hundreds of thousands of State Department cables. At the time, Americans appeared just as capable as their British counterparts of sharing flowery assessments of their host countries.

A 2008 cable from the U.S. Embassy in Moscow, discussing who was really in charge in Russia - then-President Dmitry Medvedev or his predecessor, then-Prime Minister Vladimir Putin - called Medvedev "Robin to Putin's Batman," despite the fact that Medvedev was officially the senior partner.

While Medvedev was "afraid, hesitant," another cable said, Putin was "an alpha dog."

In Paris, the U.S. Embassy called then-President Nicolas Sarkozy "a naked emperor," and noted his "thin-skinned and authoritarian style."

U.S. officials at the time largely dismissed the possibility of diplomatic fallout over such descriptions.

"Some governments deal with us because they fear us, some because they respect us, most because they need us," Gates said. "Is this embarrassing? Yes. Is it awkward? Yes. Consequences for U.S. foreign policy? I think fairly modest."