Jennifer Abel won a silver medal in the three-metre synchronised diving event at the 2020 Tokyo Olympics. 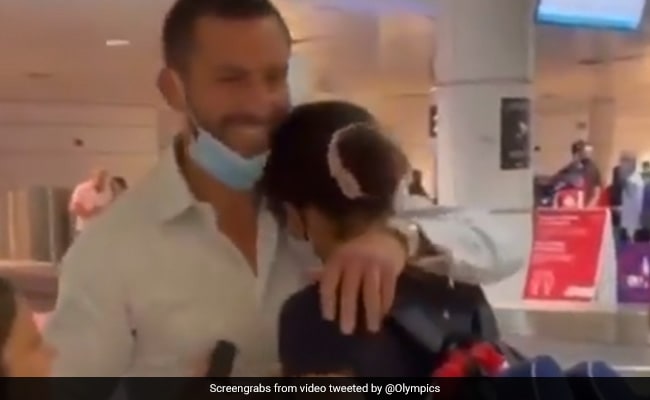 A diamond ring awaited Canada's Jennifer Abel at the airport.

Canadian Olympic diver Jennifer Abel couldn't have possibly imagined a better welcome when she touched down in her homeland after having won a silver in Tokyo. A diamond ring and a romantic proposal at the airport awaited her.

Jennifer Abel won a silver medal in the three-metre synchronised diving event at the 2020 Tokyo Olympics. She returned to Canada along with her teammate Melissa Citrini-Beaulieu on Monday.

Waiting to welcome the 29-year-old was her boyfriend and boxer David Lemieux.

In a video that has been shared on the official Olympics Twitter handle, David Lemieux can be seen wasting no time as he goes down on one knee at the Trudeau airport to propose to the silver medallist.

Surprised at the gesture, Jennifer Abel can be seen tearing up as she nods and hugs her boyfriend amid cheers from friends, family and onlookers.

Team Canada wrote, "From an Olympic medal in Tokyo to a diamond ring back home Jennifer Abel has a lot to celebrate."

Jennifer Abel said “yes” to the lovely proposal and confirmed the news on her Instagram page on Tuesday. Sharing a picture of the couple and the stunning ring, she wrote, “I said Yes to my soulmate.”

Congratulatory messages poured in from all quarters for the couple.

Summing up the sentiment on social media, one user said, “Congratulations. So much happiness in one post.”

“This is so beautiful,” said another.

Omg this is sooo beautiful!!! I love love. Congratulations to one of my favourite divers!! https://t.co/s1dE3tOco7

This is the fourth time that Ms Abel has participated in the Olympics. Her maiden appearance was as a 16-year-old at the Beijing Olympics in 2008.

"Absolutely Unacceptable": Ukraine Slams Putin's Comment On Use Of Nukes