NASA's DART spacecraft had been launched in November 2021 with the express purpose of colliding with an asteroid. 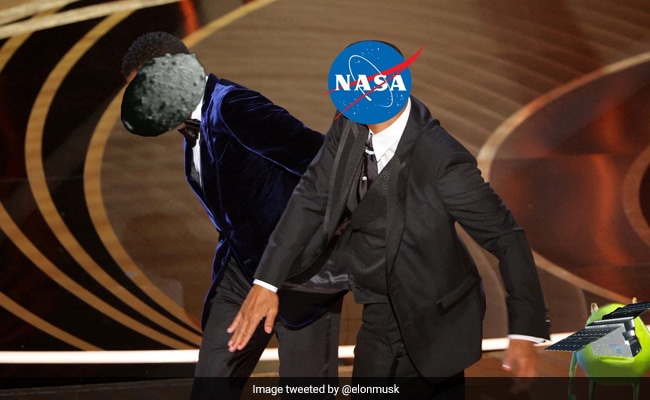 Elon Musk shared a meme on Twitter that showed NASA slapping the asteroid.

A NASA spaceship today struck an asteroid seven million miles away to deflect its orbit. The test was important, as it was a test to see if mankind will be able to prevent a celestial object from devastating life on Earth. Tesla chief Elon Musk, who is known for his cryptic posts on social media, today shared a meme highlighting the feat achieved by NASA today.

Musk shared a meme that showed NASA slapping the asteroid. The original image was taken when actor Will Smith slapped host Chris Rock on the stage at this year's Oscars.

NASA's Double Asteroid Redirection Test (DART) spacecraft had been launched in November 2021 with the express purpose of colliding with an asteroid about the size of a football stadium at 14,000 miles per hour.

“In case you're keeping score: humanity 1, asteroids 0,” Tahira Allen, a NASA spokesperson, said during the livestream after the impact.

IMPACT SUCCESS! Watch from #DARTMIssion's DRACO Camera, as the vending machine-sized spacecraft successfully collides with asteroid Dimorphos, which is the size of a football stadium and poses no threat to Earth. pic.twitter.com/7bXipPkjWD

By striking Dimorphos head-on, NASA hopes to push it into a smaller orbit, shaving 10 minutes off the time it takes to encircle Didymos, which is currently 11 hours and 55 minutes.

If in the future a hazardous asteroid is spotted heading toward Earth, it's possible that NASA or some other space agency could send a spacecraft to ram it just as DART has done. Such an impact could impart just enough momentum to slightly change the asteroid's trajectory so that, over time, it whizzes safely by Earth.