After Executive's Arrest, China Warns Against "Bullying" Of Citizens

Meng Wanzhou, the chief financial officer of Huawei, was on December 1 arrested in Vancouver on US fraud charges. 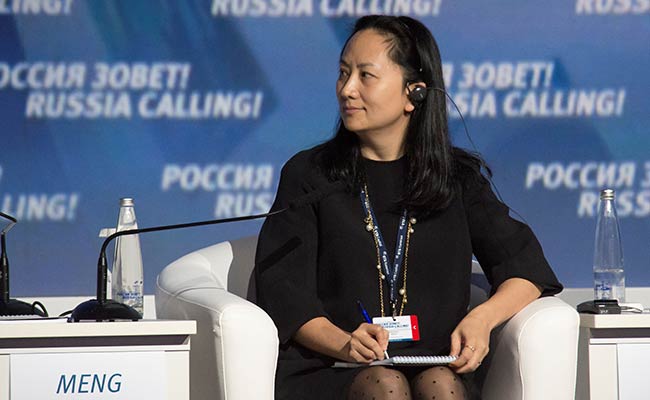 Huawei Executive Meng Wanzhou faces a possible extradition to the US.

China's foreign minister warned Tuesday against the "bullying" of any Chinese citizen, amid a diplomatic fracas over the arrest of a Huawei executive on a US warrant in Canada.

Meng Wanzhou, the chief financial officer of telecommunications behemoth Huawei, was on December 1 arrested in Vancouver on US fraud charges related to sanctions-breaking dealings with Iran, infuriating China.

"The safety and security of Chinese compatriots are our priority, China will never sit idly by and ignore any bullying that violates the legitimate rights and interests of Chinese citizens," Foreign Minister Wang Yi said in a speech in Beijing, without directly referring to the Huawei case.

"We will fully safeguard the legitimate rights of Chinese citizens and return fairness and justice to the world," he said at the opening of a diplomatic symposium.

The detention has raised tensions following a truce in the US-China trade war, with Beijing summoning both the Canadian and US ambassadors over the weekend.

Meng, who faces a possible extradition to the United States, is seeking her release on bail from a court in Vancouver.

China has accused Canada of treating Meng in an "inhumane" manner, citing reports in Chinese state-run media alleging she was not given adequate medical care.

Beijing has also claimed that the Chinese embassy was not immediately notified of her arrest.

"The Canadian government did not do this and the Chinese government learned this through other channels," foreign ministry spokesman Lu Kang said at a daily briefing.

In his speech, Wang also touched on tensions with the US, calling on Washington to stop seeing trade between the countries as a "zero-sum game".

"Take a more positive look at China's development, and constantly expand the space and prospects for mutual benefit," he said.

"There is no need to artificially create new opponents, and an even greater need to avoid self-fulfilling prophecies."