After Everest "Traffic Jam", These Climbers Are Trying To Find New Route

There are roughly 20 named routes established on Everest but majority of climbers stick to the two main routes because they are the most established. 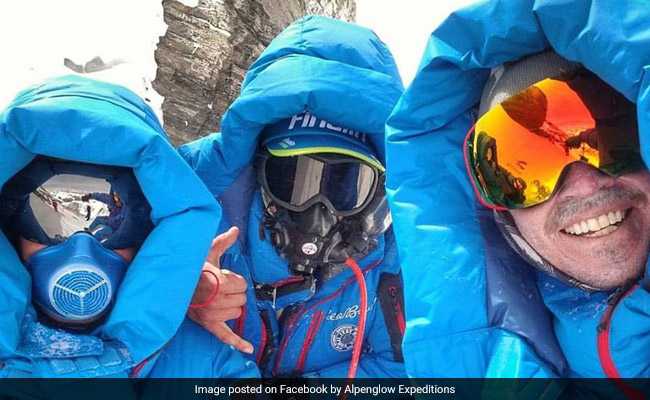 Cory Richards and Estaban "Topo" Mena have set out to carve a new route along the world's tallest peak.

There were no lines, no trash and no bodies to solemnly mark the route. It was quiet save for the sharp crunch of snow as two figures climbed along an untouched slope of Mount Everest.

The scene stood in sharp contrast to social media and news reports detailing a single-file line of climbers stretching along the ridge line, increasingly high levels of pollution and the gruesome need to navigate around the bodies of lost climbers.

The heaviest traffic, the kind seen in a viral photo, occurs along two routes, the northeast ridge in Tibet and the South Col in Nepal. This season, two climbers - Cory Richards and Estaban "Topo" Mena - set out to carve a new route along the world's tallest peak. It had been 10 years since a new line up Everest was established, and the route Richards and Mena had their eye on was unsuccessfully attempted four years earlier.

Both climbers were intimately familiar with the dangerous draw of Everest. Collectively, they have trekked the 29,029 feet to the summit six times. Mena, 31, is a guide with Alpenglow Expeditions, a guiding company which operates on Everest, and reached the peak without the use of supplemental oxygen.

Richards's relationship with Everest began in 2010, when he worked with Extreme Ice Survey, a long-term study documenting the glacier recession along the Khumbu icefall.He reached the summit for the first time in 2016 without the use of supplemental oxygen, alongside Adrian Ballinger, a professional mountaineer and founder of Alpenglow Expeditions. 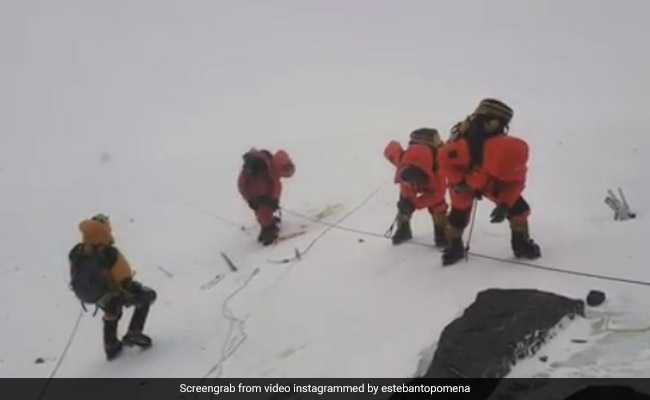 Collectively Cory Richards and Estaban "Topo" Mena have trekked the 29,029 feet to the summit six times.

There are roughly 20 named routes established on Everest, the most recent in 2009 by a Korean team. But just three percent of the roughly 7,000 recorded summits have occurred on one of these other routes, according to the Himalayan Database. The majority of climbers stick to the two main routes because they are the most established, have less unknowns and are chartered by the expeditions, according to climbing experts.

The couloir, a steep and narrow gully, that captured the interest of Richards and Mena runs up the northeast face and then intersects with the northeast ridge. Entering the bottom of the route at roughly 21,325 feet, the first section would consist of moderate snow. The hardest section would begin around 25,574 feet, where the air is dangerously thin, consisting of difficult terrain, ice steps and snow ramps. After this they would begin traversing toward the north face of the mountain, eventually intersecting with the normal route. Here they would have the option to continue along the established climb or complete the full, independent line.

The success of pioneering a new route on Everest relies at least partially on what Shaunna Burke, an associate professor of exercise and health psychology at the University of Leeds, calls "high mental toughness." Seen in a lot of professional athletes, it is especially important for alpine mountaineers because of the prolonged exposure to high altitudes and the technical nature of the sport, she said. Yet, summit attempts by mountaineers who are exceptionally driven and determined to get to the summit, can occasionally result in deadly decisions.

This year, the mountain claimed at least 11 lives, making it the deadliest climbing season since a series of avalanches in 2015 killed roughly 20 climbers. While deaths due to falls or avalanches account for more than half of the deaths since 2010, there has been an increase in altitude-related deaths, according to data from the Himalayan Database. The "death zone," where the oxygen is dangerously thin, begins around 26,247 feet. Prolonged exposure past this point leads to most of the altitude-related deaths, making the increased traffic along the two most-popular routes especially deadly. Many Everest experts blame the small weather window and prolonged summit wait-times with the increased deaths this year.

"Essentially the body is dying," said Burke, who has climbed Everest three times. Alpine climbers must be able to maintain their focus and make effective decisions while faced with a lack of oxygen and consequently decreased cognitive performance, according to Burke.

Mountaineering, especially establishing first routes, is a unique sport that requires a high level of decision-making, according to Steve House, founder of Uphill Athlete,.

High altitude climbing like Everest does not happen in a single push, but requires a slow process of acclimating to the high altitude, stopping along a series of camps. Richards and Mena's expedition utilized the already established base camp and advanced case camp of the main routes. After a few weeks, the two climbers turned their backs on the yellow tents of advanced base camp and spent a day exploring low along their projected route. Winds, which can average over 100 miles per hour, eventually forced them off the route and the next couple of trips to acclimate were along the normal route of the northeast ridge. They would not return to their projected line until the weather cleared, providing a small window of time to push for the summit.

First routes like the one attempted by Richards and Mena, rarely happen in one season, if they happen at all. The first recorded summit of Everest was in 1953 along the South Col route by the Nepalese Tenzing Norgay and New Zealander Edmund Hillary, both part of the ninth British expedition that attempted a summit. But the first known attempt by a British team was more than 30 years earlier from the Tibetan side. At least seven died during an avalanche attempting to summit in 1922 and two climbers, George Mallory and Andrew Irvine, disappeared during an attempt in 1924.

"The success rate of these kinds of things is so low. It's one in ten, one in five at the best," said House, an accomplished alpine climber in his own right. "You need everything to align and then you need to be as ready as you can be."

The route Richards and Mena attempted also caught the attention of a German/Canadian team of climbers in 2015. But the 7.8 magnitude earthquake that struck Nepal and the subsequent avalanche that swept through base camp ended the Everest climbing season that year, making a new attempt impossible.

The two climbers arrived at Everest base camp - 17,600 feet elevation - on April 10 and would attempt to summit via their projected route on May 21. Yet, the weather window - which Richards credits with causing "the 2019 Everest dumpster fire" was too cold and too short. Ultimately, they made the decision to turn back around 24,934 feet. After years of preparation, over a month of scouting and acclimatizing, they were forced to accept the rough conditions and the limits of their own physical exertion left no room for a final summit push.

"There's sadness, there's disappointment, there's anger. But underscoring all of that, we're doing this from a place of profound privilege," Richards said.

So Richards and Mena, after a training break of two weeks, have said they will start preparing for a second attempt next year. While Richards said the journey is more important than the destination, he believes the steps taken - the training, the fear, the anxiety, the sacrifices - can only truly be understood when he reaches that destination.

"It all passes and then at some point, you've erupted onto an untouched slope, on an untouched face, on the highest mountain in the world," Richards said. "And that's why you're there."