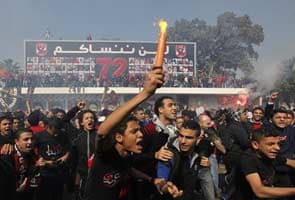 Cairo: An Egyptian court on Saturday confirmed the death sentences against 21 people for taking part in a deadly soccer riot but acquitted seven police officials for their alleged role in the violence. Suspected fans enraged by the verdict torched the soccer federation headquarters and a police club in Cairo in protest.

The trial over the melee that killed 74 people after a soccer game in the city of Port Said in early 2012 has been the source of some of the worst unrest in recent weeks to hit Egypt. After the 21 people - most of them fans of Port Said's Al-Masry club - were first sentenced to death on Jan. 28, violent riots erupted in the city that left some 40 people dead, most of them shot by police.

On Saturday, the court announced its verdict for the other 52 defendants in the case, and sentenced 45 of them to prison terms, including two senior police officers who received 15 years. Twenty-eight people were acquitted, including seven police officials.

As expected, the court's decision failed to defuse tensions over the case, which has taken on political undercurrents at a time when the entire nation is mired in political turmoil, a worsening economy and burgeoning opposition to the rule of Islamist President Mohammed Morsi.

Shortly after the verdict was announced, suspected fans of Cairo's Al-Ahly club who had gathered in the thousands outside the team's headquarters in central Cairo went on a rampage, torching a police club nearby and storming Egypt's soccer federation headquarters before setting it ablaze. The twin fires sent plumes of thick black smoke billowing out over the Cairo skyline.

Earlier at the courthouse across town, Judge Sobhi Abdel-Maguid read out the verdict live on TV, sentencing five defendants to life in prison and nine others to 15 years in jail. Six defendants received 10-year jail terms, two more got five years and a single defendant received a 12-month sentence.

The court's decision on the nine security officers on trial was among the most highly anticipated - and potentially explosive - verdicts. In the end, the judges sentenced the city's former security chief, Maj. Gen. Essam Samak, and a colonel both to 15 years in prison, while the others were acquitted.

The verdicts can be appealed.

Many residents of Port Said, which is located on the Mediterranean at the northern tip of the Suez Canal, say the trial is unjust and politicized, and soccer fans in the city have felt that authorities have been biased in favor of Al-Ahly, Egypt's most powerful club.

The Feb. 2012 riot followed a league match between Al-Masry and Cairo's Al-Ahly club, with Port Said supporters setting upon the visiting fans after the final whistle. The deadly melee is Egypt's worst soccer disaster.

Before the fires broke out, thousands of Al-Ahly fans had gathered outside the club's headquarters in Cairo. They appeared divided on whether to welcome the verdicts or consider them flawed.

"We came for the rulings on the defendants from the police," said one fan who refused to give his name. "Why should I be happy when most of them were acquitted?"

In Port Said, a city that for weeks has been in open rebellion against the Islamist president, several hundred people, many of them relatives of the defendants, gathered outside the local government offices to vent their anger. They chanted slogans against Morsi's government and the verdicts.

"There's still an appeal process. God willing, our rights will be restored," said Islam Ezzeddin, a local soccer fan. "We are not thugs. I hope to God when there's an appeal that we feel we live in a country of law and justice."

Port Said, a strategic city at the Mediterranean end of the Suez Canal, has been the center of the heaviest violence in the latest wave of unrest. The ongoing turmoil began on Jan. 25, when hundreds of thousands across the country marked the second anniversary of the start of the uprising that toppled Hosni Mubarak's regime.

Cairo, the Mediterranean port city of Alexandria, and several cities in the Nile Delta north of the capital have all been swept up in the unrest as well.

During clashes between police and protesters the past week that killed eight people, Port Said also saw dangerous frictions between police and the military. Army troops trying to break up the clashes at one point fired over the heads of police forces, which had been shooting tear gas in their direction.

Promoted
Listen to the latest songs, only on JioSaavn.com
At least some of the anger city residents feel for the police was defused on Friday, when police handed over security control in the city to the military.

No police could be seen anywhere in Port Said on Saturday. A military helicopter hovered overhead and army checkpoints were set up on main streets